Wrapping it up with a silver bow

Wrapping it up with a silver bow 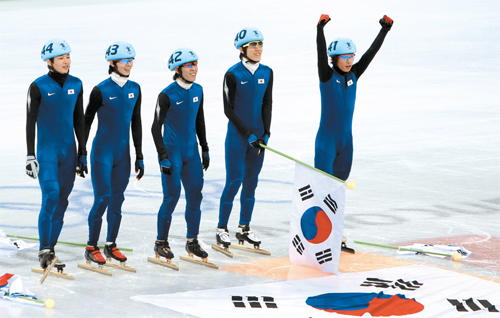 The Korean men’s relay team gets ready to bow to the crowd after a silver medal winning performance in the 5,000-meter relay event at the Pacific Coliseum on Saturday. By Lim Hyun-dong

Sung Si-bak and Park Seung-hi failed to win gold medals in individual events over the weekend.

But even as the Korean short-track speed skating team came up short of its goal, it provided some exciting competition at the Vancouver Winter Games.

On the final day of short-track speed skating competitions on Saturday, the men’s relay team earned a silver medal, Sung won a silver in the men’s 500-meter event and Park added another bronze medal in the women’s 1,000-meter event.

Sung and Lee Oh-suk entered competitions at the Pacific Coliseum with their last shot at an individual gold medal, with Park also trying to win the women’s team’s first gold of the Vancouver Winter Games. 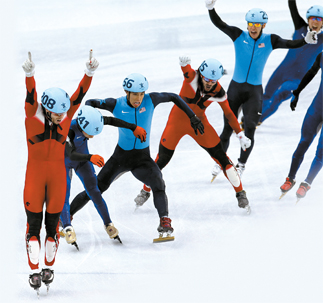 Kwak Yoon-gy, second from left, stretches for the finish line in the men’s 5,000-meter relay event.

With a loudly cheering Korean delegation including athletes such as gold medalists Kim Yu-na, Mo Tae-bum, Lee Sang-hwa and Lee Seung-hoon, the Korean short-track skaters came up short of gold but made an entertaining show nonetheless.

In the men’s 500-meter, the top-ranked Sung and his teammate Lee were gunning for their first gold medal in an individual event. Sung led the pack and looked safe to finish first, but in the final stretch he lost his balance, without touching another skater, and skidded to the finish line. Tremblay Francois-Louis also lost balance and Charles Hamelin of Canada and Apolo Anton Ohno of the United States crossed the finish line first and second, respectively. However, Ohno was subsequently disqualified by the chief official for pushing Francois-Louis.

In the end, Sung was credited with a time of 40.821 seconds and a silver medal, with Hamelin and Francois-Louis coming in first and third, respectively.

“I think I placed too much pressure on myself coming into the Olympics. After the Feb. 14 incident [the collision with Sung], I knew I could not reach my goal and it affected me negatively,” stated Sung in a post-race interview. “It’s regrettable that I could not celebrate my birthday with a gold medal win. I wonder if I can celebrate with a win at the next Olympics [in 2014 in Sochi, Russia]?”

Lee, who played second fiddle to three-time gold medalist Ahn Hyun-soo at the 2006 Turin Olympics, was also favored to finish on the podium but lost balance with two laps to go in the semifinals. Lee failed to win an individual medal in Vancouver.

Despite having fallen short of their goals, the two skaters teamed up with Lee Jung-su and Kwak Yoon-gy to finish second in the 5,000-meter men’s relay event the same day. In the event in which five four-man teams skate 45 laps around the 111.12-meter oval track, Korea maintained third place behind Canada and China throughout most of the hectic race.

With three laps remaining, Korea fell back as far as last in the group, but Kwak managed to chase down the Chinese and Americans to finish in second place. The Canadian squad finished first with the time of 6 minutes, 43.610 seconds and Korea clocked in at 6 minutes, 43.845 seconds with the Americans coming in at 6 minutes, 44.498 seconds. In the women’s 1,000-meter finals, Park earned a bronze medal behind China’s Wang Meng and the United States’ Katherine Reutter. Korea’s other skater in the finals, Cho Ha-ri, finished fourth behind Park.

Having won a bronze in the 1,500-meter race behind teammate Lee Eun-byul, the 17-year-old became a two-time bronze medalist and the lone multi-medalist among the Korean women’s short-track squad.

The usually dominant Korean women’s squad finished the Olympics without a single gold for the first time since the 1992 Albertville Winter Games.