Cultural study through beats and baduk

Cultural study through beats and baduk 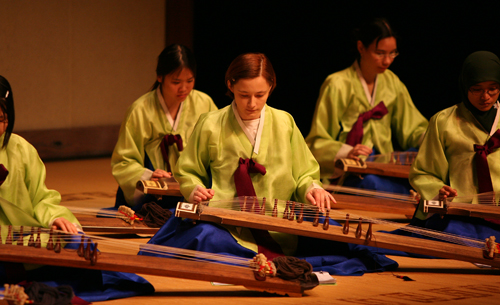 Foreign students play the gayageum zither at the National Center for Korean Traditional Performing Arts, which offers classes in English in three Korean instruments. Provided by the organization

For expats living in Seoul, it is easy enough to find places to learn the martial arts taekwondo or hapkido, but another fun way to learn about Korean culture is to study its traditional music and games. Here’s a look at some of these lesser studied - but just as rewarding - hobbies.

Learning more about a country’s traditional music can shed a lot of light onto its aesthetics. There are three major varieties of Korean traditional instruments: string, wind and percussion, with the latter tending to be the most prominent. Percussion in particular is tied to important folk dances that were once the main event at village festivities and shamanist ceremonies.

The most recognizable form of Korean traditional percussion is samulnori, named for the “four drums” typically used in the format: the kkwaenggwari, jing, janggu and buk. Samulnori is often paired with a popular folk dance form where the percussionists wear sangmo, hats with long white ribbons attached, adding to the spectacle by flipping and whirling their heads while beating their drums.

Learning one of the samulnori drums can be a way both to learn about Korean culture and to make friends, since a performance always involves other players. In fact, most universities have samulnori clubs where members learn, practice and give performances together. Even if you’re not a student, samulnori clubs exist for members to learn and play together.

A quick search for “samulnori cafes” on the portal site Daum should also provide a lot of results. To join one of these clubs, it’s not necessary to have previous experience, as many members join specifically to learn from more experienced members. Joining a club like this not only gives you experience with Korean music, but will is also a look into social relationships in Korean culture - a demonstration of the seonbae and hubae (senior and junior) organizational structure.

If you’d prefer a formal class setting, the National Center for Korean Traditional Performing Arts offers classes for expats on traditional instruments. Their 12-week course meets from 10:30 a.m. to 12:30 p.m. each Saturday and is taught by NCKTPA performers entirely in English.

Instruments are leased to students for the length of the term, and the fee for the class is 30,000 won ($26). The classes are offered twice a year, in the fall from September to December and in the spring from March to June.

Along with the janggu drum, classes are also available on the gayageum and haegum fiddle. A samulnori class is only open to those with previous experience, or who have already completed the janggu course.

Steven Morphy, a teacher who has already studied for three terms at the NCKTPA, said that he’s been satisfied with the program as a way to learn more about Korean culture and meet like-minded expats.

“It has allowed me to explore the roots of the culture here and the long history of this country. Plus, music is an expression of the values of a people. Even though many of the beliefs and rituals that gugak [Korean classical music] comes from have become obsolete in modern Korean society, the general ideas and mind-sets are still present,” he said.

Morphy, who has already studied gayageum, janggu and samulnori, is currently taking private danso lessons with an NCKTPA instructor and is considering a fourth semester through the program.

For more information about registering for the course, contact Baewon Lee by e-mail at baewon76@gmail.com or visit the Web site www.gugak.go.kr and click “English,” then “Programs.”

If you’re less of an artsy right-brainer and more of a logical thinker, you might try one of Korea’s complex traditional games, the most challenging of which is baduk, known in English by its Japanese name, Go.

One of the most ancient board games in existence, the rules to baduk are deceptively single. The differences in strategy between baduk and chess are often said to illustrate the differences between Eastern and Western thought (though there is a Korean game that’s similar to Western chess called janggi).Go originated in China and is played throughout all of East Asia.

Although the rules are simple, baduk is a notoriously difficult and complex game. The board, a simple grid made up of 19 rows and columns, and the plain black and white playing pieces may trick the first-time player into thinking it’s as easy to learn as checkers.

In fact, the game, which is often used as an analogy for war, often takes years of practice before players can begin to play at what is considered an intermediate level. If you mention that you’re learning baduk to your Korean friends, they’ll most likely be impressed, since in Korea it’s considered a game that requires an immense amount of logic, balance and long-term strategy. Mothers in Korea often choose to have their children learn baduk in order to foster these skills at a young age.

In fact, although a computer program can beat world champions when playing chess, even intermediate players can beat the best computer programs at baduk due to the near-infinite number of board states (more than the number of atoms in the universe).

The game is so difficult that it’s possibly the only board game in which one can receive a graduate degree: Myongji University in Seoul has offered a master’s in Baduk Studies since 2003.

Baduk is said to reveal much about each individual player’s psyche and style, and becoming a master involves not only skill at game play but also reading your opponent. There are plenty of academies and books for learning baduk, but unfortunately most of these classes and materials are in Korean. Still, since most of the teaching is done pictorially, using a diagram of the board and pieces, it’s possible to study even without a deep understanding of the language. Because there are few foreign players of baduk, it’s a great chance for expats to understand a hidden area of Korean culture.

For self-study, one particularly popular English series is “Korean Style of Baduk,” which comes in three volumes, showing different examples of play and strategy. For those interested in a bit more dedicated study, there are always classes at the International Baduk Academy, near Myeongil Subway Station, line No. 5.

For more information, visit their Web site at www.baduk-academy.com. If you’re looking for an authentic experience playing outside a classroom, pack up your board and head over to Tapgol Park in Jongno, where many Korean elderly men gather and play.

For more information on this article or for general inquiries about life in Seoul, visit the Seoul Global Center’s revamped Web site http://global.seoul.go.kr or its unofficial blog www.seoulcityblog.com.