A glittering end to a fine spectacle

A glittering end to a fine spectacle

The Olympic teams march around the Canadian Olympic flame as they arrive for the closing ceremony for the Vancouver 2010 Olympics in Vancouver, British Columbia, Feb. 28. [AP/YONHAP]

VANCOUVER - An Olympics that began with the death of a luger ended Sunday with an exuberant celebration of Canada - reflecting a determined comeback by the host country’s organizers and athletes.

A festive crowd of 60,000 jammed into BC Place Stadium for the closing ceremony, many of them Canadians abuzz over the overtime victory by their men’s hockey team earlier in the day to give the host nation a Winter Olympics record of 14 gold medals.

The gaiety contrasted sharply with the moment of silence at the opening ceremony Feb. 12 for Nodar Kumaritashvili, the 21-year-old luger killed in a horrific training-run crash on the sliding track in Whistler just hours before.

“These games started out with a nightmare and ended up with a golden dream,” said Kevan Gosper, an International Olympic Committee member from Australia who was in the stadium crowd Sunday evening. 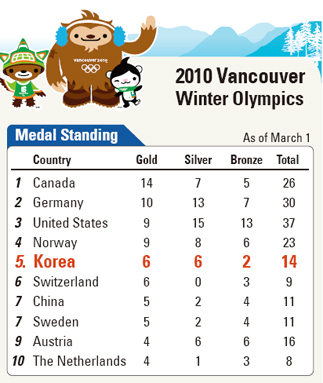 Canadian officials ensured there would be poignancy at the closing ceremony, selecting figure skater Joannie Rochette as their flag bearer. Her mother died of a heart attack hours after arriving in Vancouver last weekend, but Rochette chose to carry on and won a bronze medal, inspiring her teammates and fans around the world.

“Yes, it’s been a tough week for me,” she said before the ceremony. “But I walk tonight into that stadium with a big smile on my face. ... I accomplished my goals, and I want to celebrate with my teammates.”

Her entire team was greeted with a mighty roar when they joined the fast-moving, informal parade of athletes into the stadium. Among the cheerleaders was Prime Minster Stephen Harper, wearing a Canada jacket.

The U.S. flag bearer was Bill Demong, a veteran of four Olympics who won a gold and silver medal in Nordic combined.

There were plenty of reasons for Canada and the United States to celebrate after 17 days of competition. The U.S. won 37 medals overall - the most ever for any nation in a Winter Olympics.

Canada, after a slow start, set a Winter Games record with 14 golds and sparked public enthusiasm in Vancouver that veterans of multiple Olympics described as unsurpassed.

The comeback by the Canadian athletes was mirrored by the resilience of the Vancouver Organizing Committee. It struggled with a series of glitches and weather problems early in the games, adjusted as best it could, and reached the finish line winning widespread praise for an exceptional Olympics - albeit one tinged with sadness.

Right from the start of the closing show, there was a spirit of redemption as the producers made up for an opening-ceremony glitch in which one leg of the Olympic cauldron failed to rise from the stadium floor. On Sunday, the recalcitrant leg rose smoothly.

Later came the traditional handover ceremony, during which the Olympic flag was lowered and presented to the hosts of the next Winter Games in 2014.

Vancouver Mayor Gregor Robertson handed over the five-ringed flag to IOC president Jacques Rogge, who passed it on to Anatoly Pakhomov, the mayor of Sochi, Russia. That was followed by the Russian national anthem and a presentation about Sochi featuring opera, ballet and ice skating. AP