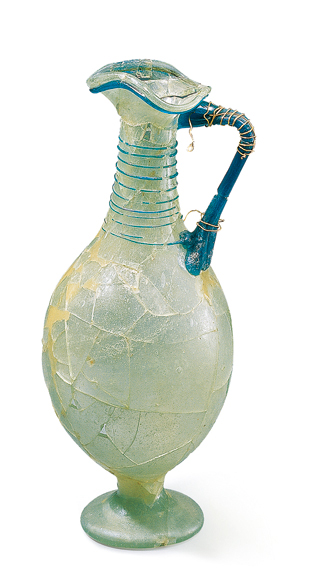 Glass containers made during the Silla Dynasty (57 B.C. ? 935) have mainly been excavated from large tombs that usually belonged to kings. Like golden crowns and golden belts, containers such as these could only be possessed by aristocrats.

This glass bottle, which is shaped like a signal fire, is also assumed to have belonged to someone with a high social and political standing. The bottle, excavated from Hwangnam Daechong, a large tomb in Gyeongju, South Gyeongsang, is similar in shape and manufacturing method to the kinds of Roman glass that have been found in southern Russia, near the Mediterranean and in West Asia. Historians assume that these production techniques were passed all the way through the Eurasian continent, along the Silk Road and down the sea route to China and Silla.

The bottle’s luminescent green color and curved shape are similar to those of the Oinochoe, a wine jug found in Greece. The gold thread winding around the handle is assumed to have been used to fix the broken parts.

The photos and text for Treasure Trove are provided by the National Museum of Korea. For more information, call (02) 2077-9000 or visit www.museum.go.kr.