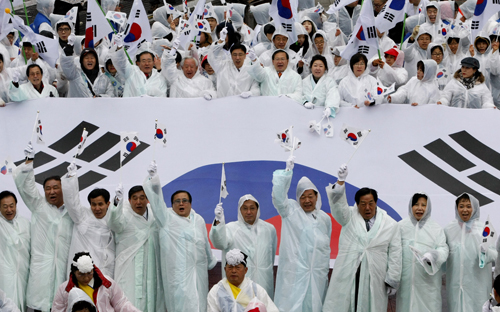 Koreans shout as they carry a huge national flag yesterday during a ceremony to celebrate March 1 Independence Movement Day, the anniversary of the 1919 uprising against Japanese colonial rule, in Seoul. [AP/YONHAP]

Independence activist An Chang-ho once said during Japanese occupation that he hoped Japan would “become a good nation” rather than meet its demise.

It’s an interesting viewpoint, as it came from the founder of a secret anti-Japanese group called Sinminhoe, or the New People’s Association.

After the association disbanded, patriotic activists gathered together under the command of religious leaders and finally set a date of March 1, 1919 for a grand mission: conduct an organized, massive protest of the occupation.

More than 7,500 people were killed and 15,849 were wounded during the movement. But more than two million Koreans participated from all over the country by staging peaceful demonstrations under the principles of unified sovereignty, popular participation and nonviolence.

The March 1 Independence Movement not only spread Koreans’ steadfast will for independence but also inspired China’s May 4 Movement and Mahatma Gandhi’s nonviolent resistance in India.

The protest here in Korea is remembered in history as the pioneering people’s movement of the 20th century.

An Chang-ho advocated the “national reform theory,” and the great orator ignited the flame of patriotic spirit among Koreans.

He often told young Korean followers, “You should never lie even if you are facing death. Don’t lie even as a joke.”

Laozi wrote in the Tao Te Ching that an eloquent man is not to be trusted.

However, An Chang-ho had not only the gift of eloquence but also a truly respectable personality. He thought that lies were behind the fall of the Joseon Dynasty (1392-1910), so he vowed never to tell a lie.

He said, “Lies, you are the nemesis that killed my country. I cannot live under the same sky with the enemy of the father and the king, so I will never tell a lie again even after death.”

He pinned the cause of national ruin on lies told inside the country before blaming the Japanese. His introspection came from his soul.

Emerson said that “a nation never falls but by suicide,” and this has always been a sad truth for us.

The lies of politicians have become commonplace. Look no further than the dispute over the Sejong City project, which has swallowed all other national issues like a black hole and has shifted from a policy contest to a power struggle among factions. The two sides blame each other for telling lies, but the citizens understand the substance of the discord all too well.

The court is a place to reveal the truth, but lies prevail there as well. Over 2,000 people are indicted for perjury every year. The number is quite shocking compared to 130 perjury cases in Japan, whose population is more than twice the size of Korea’s. Legal professionals are highly responsible for the widespread lying in the courts.

Moreover, the nation’s religious leaders - who helped galvanize the March 1 Independence Movement - have locked themselves up in fundamentalism and denominationalism. They have grown distant from the true face of religion.

As believers seek favors through prayers, the leaders inherit their churches and the religions are affected by materialism.

More than 90 years ago, churches in Korea held services not in grand buildings but in 47 humble chapels devastated by fires.

Yesterday we celebrated the March 1 Independence Movement once again. We should be embarrassed when thinking about our actions these days compared to those of our dignified ancestors. The Korean Peninsula is still divided, and South Korea as well is divided into the left and right in terms of ideology, the east and the west in regions, the rich and the poor in income and the ruling and opposition in politics. Our noble ancestors of the March 1 Independence Movement would find today’s generation pathetic as we continue to hate one another and engage in endless fights.

We love because we are different. Difference is not a condition for discord but a driving force for love.

The conservatives and progressives have much more to do than fight.

The open-minded conservatives who do not fear changes are healthy. The moderate progressives who respect history and tradition are charming.

An Chang-ho did not want Japan to fall but hoped that it could become a good nation. Communication and harmony open the way for truth, while division and confrontation are signs of lies. The ancestors pursued unified sovereignty, popular participation and nonviolent means while suffering under colonial rule. The wisdom of our ancestors seems like a legend from the old times, but we need to remind ourselves of An Chang-ho.

“If we do not consider reforming ourselves as a major task,” he said, “we are deceiving the world and we are being deceived as well.”


*The writer is a managing partner at HMP and a former chief justice of the Seoul Central District Court. Translation by the JoongAng Daily staff.