Even among the all-time greats, Kim Yu-na skates apart

Even among the all-time greats, Kim Yu-na skates apart

Since the 2009 World Figure Skating Championships in Los Angeles, Kim Yu-na has been overwhelming her opponents on the ice with technically sound jumps. Her latest accomplishment, an astounding world record-setting performance at the Olympics en route to winning Korea’s first figure skating gold begs the question of what sets Kim apart from other skaters and why her popularity has reached such a fever pitch.

Kim’s road to a record-setting Olympic gold started with her win at the World Junior Championships in 2006. She would move up to the senior level the same year at the ISU Grand Prix Skate Canada and place third overall, going on to a third place finish at the 2008 World Championships and a second place finish at the 2008-09 ISU Grand Prix Final - the last time she would ever finish below first place.
A stunning signature move

Kim’s thrilling gold last week came after just four years of competing at the senior level, an astonishingly quick progression. That accomplishment puts Kim on an exclusive list of the greatest world and Olympic champions to have graced the oval rink with beauty and flare, along with names like Peggy Fleming, Katarina Witt and Michelle Kwan.

But there’s something special about Kim that sets her apart from even those all-time greats: her jumps. The secret to Kim’s success comes from her ability to execute her triple lutz, triple toe loop combination to near perfection. The sequence of moves has a base value of 10 points and a grade of execution value of two points for a combined total of 12. In comparison, her Japanese rival Mao Asada’s most difficult jump is the triple axel, double toe loop combination, which together have a base value of 9.50 points and grade of execution value of 0.20 points for a combined total of 9.70. The difficulty level of Kim’s routine plus the total executed elements score she can earn is 78.30, compared to Asada’s 64.68.

Kim is able to complete her jumps, including the difficult triple-triple combination, to near perfection. The combination starts on the back outside edge of the left skate for three full turns followed by another three backward full turns on a jump that starts and ends on the right foot. What makes the combo so difficult in that a skater must not only maintain her speed after the first jump, but also complete six full revolutions.

“Kim Yu-na is the greatest Olympic champion. No other Olympic champion has ever had this type of dominating performance,” said Kim’s coach Brian Orser at a press conference. “Legends like Katarina Witt and Michelle Kwan were great, but Kim has a special charm about her.” 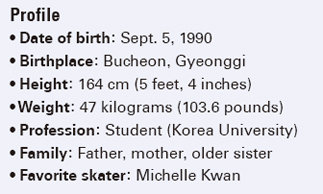 Aside from the difficulty of her jumps, Kim shows athletic and emotional range in her routines, and her signature combination covers approximately seven meters (23 feet) of ice. Add to the mix her graceful yet precise movements and her ability to captivate the audience with her facial expressions, and you have a skater who belongs among the greatest in the sport.

“At their peaks, Witt and Kwan’s routines were dominant. However, when it comes to jumps, Kim is in a class of her own,” said Shin Hye-sook, a Korean Skating Union official. “She covers about 1.5 times more distance on her jumps compared to male skaters and does not make any mistakes. While her jump is her specialty, she doesn’t have any weaknesses when it comes to other components of her routines like the spins, spirals and steps. The artistic merit of her routine is among the best.”

Kim grew up idolizing former world champion and two-time Olympic medalist Michelle Kwan. And the American skater, in return, spoke glowingly about Kim’s overall performance in an interview with the American news network NBC, “She’s got the jump, the triple-triple, the spin, the looks, she’s got the whole package,” Kwan said.

“When the music starts, it’s a highlight. She does everything well. The speed across the ice is extraordinary to see. Seeing her live is really amazing,” Hamilton said in an interview with NBC. 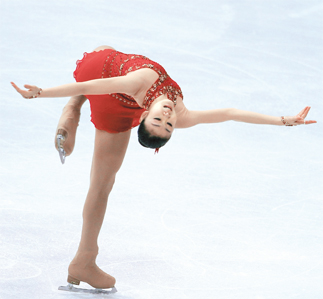 Kim glides during the free skate program to “Sheherazade during the 2008-09 season. [JoongAng Ilbo]

The American online magazine Slate even called Kim’s performance “the climax of this Olympiad.”

“Kim’s body proportions are perfect. I’ve designed countless costumes, but it’s rare to come across this type of body,” stated Kim Yoon-gwan, who designed Kim’s costumes for close to a decade until last year. “As a designer, it’s a blessing to work with an athlete like Kim.”

Kim may look shy off the rink, but on it she’s fiercely competitive. Like all great athletes, Kim thrives under pressure - sometimes appearing to prefer the spotlight. In her autobiography released last year, Kim wrote that the immense pressure of representing Korea and her enormous following in her home country weighed heavily on her mind.

“If my performance falters, not only the people around me but the whole nation might turn their backs on me,” she wrote. 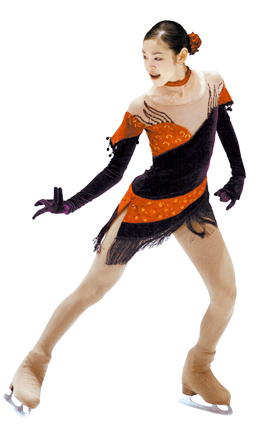 Yet Kim was ready to prove she was the best, and used an impressive combination of strength, sensuality and even flirtation with the crowd to dominate her competition.

“You worry that the Olympic pressure at 19 years old is going to crush her somehow, but for her to stand up the way she did and answer that performance the way she did, Mao [Asada] has gotta think, ‘I’ve got nothing,’” Hamilton said on the NBC broadcast.

Kim is blessed with natural ability but is also known for a strong work ethic. With the support of her mother, Park Mi-hee, the athlete has worked tirelessly to win her gold. She is known to practice about 300 days per year and attempt an average of 30 jumps per day in practice. To keep up this tough regimen, Kim reportedly has to replace her skates every four months. In the past, she is known to have attempted a triple lutz jump 65 consecutive times before finally being satisfied. In the early stages of Kim’s career, it was her mother who urged her on and gave her support.

“My daughter trained and competed for 14 years with the goal of achieving this moment and she’s finally realized her dream,” Park told the media after her daughter’s win. 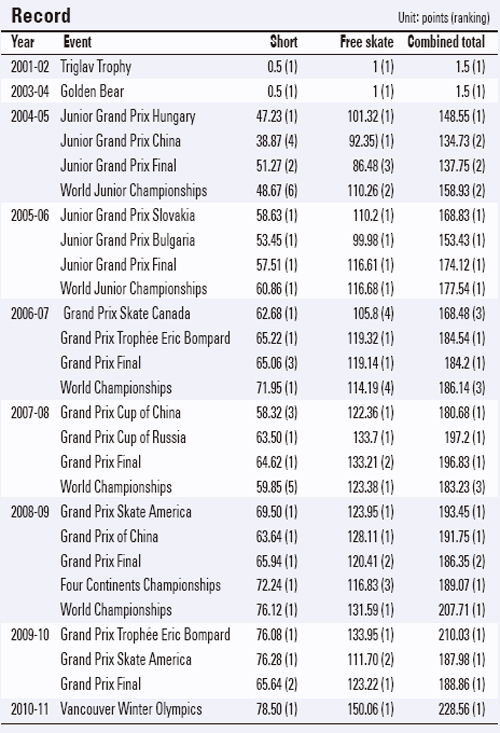 But Kim didn’t reach the top in a vacuum: She brought with her the admiration and goodwill of an entire nation. In fact, nothing short of obsession would describe the enormous interest Koreans have in Kim.

From the wall-to-wall press coverage of the skater to the dizzying number of advertisements she’s appeared in, images of Kim are now as much a part of Koreans’ lives as the ubiquitous rice and kimchi that accompany every meal. In an online poll conducted by the Ilgan Sports since Feb. 27, 62 percent chose Kim as the Most Valuable Korean Athlete in Vancouver. Speed skater Lee Seung-hoon, who earned a 10,000-meter gold medal and a 5,000-meter silver medal, is in a distant second with 26 percent.

The looks, skills and ability to withstand pressure and deliver are all a big part of Kim’s popularity, but there’s more to her than her performance on the ice. A big part of Kim’s charm is her humility. Despite her immense popularity - and being on top of Forbes’ top-earning athletes list at the 2010 Vancouver Winter Games with $7.5 million in endorsement deals alone - Kim always remembers to share some of her earnings with the less privileged. In 2008, Kim was selected from a group of 100 people by the Korea Green Foundation, a nongovernmental environmental foundation in Korea, as a philanthropist who “lit up the world.” She has also provided scholarships and regularly holds charity ice shows, the “Kim Yu-na’s Angels on Ice,” in Korea to help the needy.

The triumphant queen returns to Korea for just three to four days before heading back to her training grounds in Toronto, Canada. Although no one knows for certain how much longer Kim will compete at the amateur level, fans can be assured of another mesmerizing performance from her at the 2010 World Figure Skating Championships in Turin, Italy from March 22 to 28.

Coach Brian Orser said at a press conference at the Olympic Media Center yesterday that Kim will decide whether to try for another Olympic gold in Sochi, Russia in 2014, but added he thought she could pull it off. What do Orser and choreographer David Wilson have in store for Kim? Orser said during the press conference yesterday that the triple axel jump would be her next challenge. The young skater started training with Orser in 2006 to learn the triple axel but could not master it due to a back problem.

“She tried the jump two to three years ago but has not attempted the jump since. I’m confident Yu-na can easily make the jump,” Orser said.