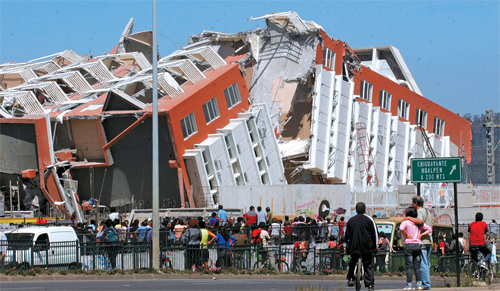 Residents look at a collapsed building in Concepcion on Saturday, the country’s second-largest city, after an 8.8-magnitude earthquake struck central Chile. [AP/YONHAP]

The Korean government yesterday offered “all-out support” after Chile was struck by a massive, 8.8-magnitude earthquake on Saturday, and expressed its sympathy to the South American nation.

President Lee Myung-bak yesterday sent a telegram to Chilean President Michelle Bachelet to offer his “heartfelt condolences” to the people of Chile and his hope that Chile would be back on its feet as soon as possible.

“The Korean government and its people are prepared to offer all-out support to help [Chile] overcome these devastating times” Lee added.

The casualty toll was virtually certain to rise as the day wore on. As of noon yesterday, Korean time, Chilean officials told foreign news wires that at least 300 people had been killed by the earthquake, which struck near Concepcion, a city some 300 miles southwest of the capital, Santiago.

The Foreign Ministry in Seoul said yesterday it held an emergency meeting with relevant government agencies to discuss the government’s relief aid plan for Chile.

“Chile is one of our closer allies and our exchanges have been expanding, especially in the economy,” the ministry said. “The exact size of our aid will be determined after taking into account the level of support from the rest of the world. We will decide whether to send a rescue unit after further consultations with the Chilean government.”

No date has been set for that consultation as yet, the ministry said.

The ministry added: “Our rescue and medical workers are all prepared to fly out as soon as the decision is made to dispatch them to Chile.”

The ministry confirmed the safety of all 13 Koreans living in Concepcion. There are about 2,200 Koreans residing in Chile overall.

In the aftermath of the quake, the Japan Meteorological Agency ordered more than 50,000 people in the northern part of Japan to evacuate on a tsunami warning. The agency said waves of up to three meters (10 feet) could strike northern areas of Aomori, Iwate and Miyagi, and also the entire Pacific coastline of the Japanese archipelago.