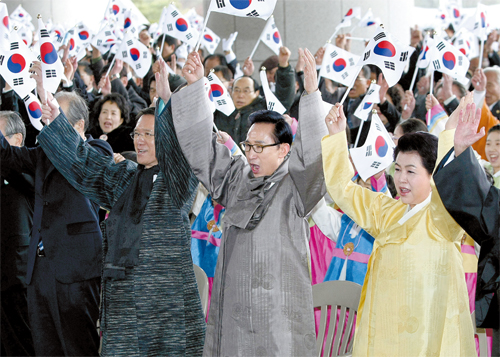 Amid the administration’s deepening predicament over rewriting the development blueprint for Sejong City, President Lee Myung-bak yesterday urged Koreans to move away from wasteful debates and implement a far-sighted national plan to build a truly advanced country.

Marking the 91st anniversary of the March 1 Independence Movement against Japan’s colonial rule, Lee spoke during a commemorative ceremony at Independence Hall in Cheonan, South Chungcheong.

Lee said the spirit of the March 1 movement aimed at building a happy and prosperous nation through unity and harmony. He urged Koreans to overcome their differences, respect each other and renew their “determination to prepare a national plan that will span the next 100 years.”

“Although we are having a fierce dispute over a far-sighted national policy, I strongly believe we will be able to overcome it wisely,” Lee said.

The remarks came as the Lee administration struggles to rewrite the development blueprint of Sejong City in South Chungcheong. Lee seeks to shelve a plan to develop the city as an administrative hub with relocated government offices and instead create a science and business center.

Although Lee did not say his speech referred to his vision for Sejong City, he has said on numerous occasions that the new development plan is for the nation’s future and will last a century.

Opposition parties as well as pro-Park Geun-hye lawmakers inside the Grand National Party have fiercely rejected Lee’s move to revise the initial blueprint.

The Grand Nationals had marathon discussions throughout last week to determine an official position, but no conclusion was reached. Senior GNP lawmakers with more than three terms will continue the discussion after a short cooling-off period to ease tensions between pro-Lee and pro-Park factions.

A senior Blue House official said Sunday that Lee, when the time comes, will make a “bold decision” about the Sejong City issue.

“The decision will likely be toward the direction to realize the new development plan,” the official said on condition of anonymity. “And the decision will be carried forward step by step.”

He said the president’s decision will be made after the Grand Nationals reach their consensus.

Speculation grew inside the political community that the Blue House is considering a referendum to resolve the controversy. Asked if that was what the bold decision referred to, the Lee aide said, “It’s up to the media to make an interpretation.”

An increasing number of presidential aides, however, are talking about the possibility. “We have listened to constitutional experts’ opinions to see if it is possible to hold a referendum on the Sejong City issue,” said a Blue House official. “And about a half of them responded positively.”

The Constitution’s Article 72, which governs policy referendums, states that “the president may submit important policies relating to diplomacy, national defense, unification and other matters relating to the national destiny to a national referendum if he or she deems it necessary.”

The option of holding a national referendum over the Sejong City issue was first proposed by pro-Lee lawmakers at the end of last year. Pro-Park lawmakers have opposed it, arguing that a referendum will further split the nation.