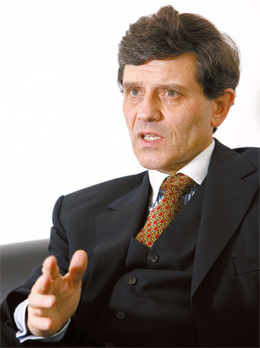 While the Group of 7 was a vital power in 20th-century governance and economics, the expanded world system represented by the Group of 20 better reflects contemporary reality - and will play a bigger role in the 21st century, according to Germany’s envoy to Korea.

In a recent interview with the
JoongAng Daily, Dr. Hans-Ulrich Seidt spoke about Germany’s views for the new format of global governance, bilateral issues with Korea and the need for the European Union to play a bigger role in the G-20’s decision-making.

“The Group of 7 was first developed during the Cold War,” Seidt said. “Back then, we had the Western world, the communist world and the third world. Nowadays, we have one world, and this should be reflected in the global governance body.”

Germany, an original member of the G-7, does not mind sharing power in the new governance body with other nations, he said.

“We actually welcome this new and important forum. We believe that this cooperation of different parts of the world will reflect the reality of our common future better than the old format developed during the Cold War,” Seidt said.

“We also strongly believe that as a part of the new forum, we should have better representation of different regions. Therefore, we believe the European Union should actively participate as a member of G-20 because regulatory power of the [European Commission] will be important for the new governance body to make decisions and implement them.”

Seidt said he has no doubt that Korea will successfully host the G-20 summit in November because the nation is keenly aware of the event’s significance.

“I would say that Koreans know very well that their prosperity depends on economy. They know about the miracle of the Han River,” he said. “If you want to keep this prosperity in the future, you need open markets to the world. One topic of the G-20 should be free trade worldwide.

“Another important issue is the currency. Koreans know that their prosperity depends on stable currency,” he said. “They also understand that the G-20 Summit will deal with financial markets and regulations, and this will contribute to the security and prosperity of every Korean. Free trade and a financial system that helps productive parts of society - such as the manufacturing, car and shipbuilding industries - are the keys.”

The German envoy noted that Korea and Germany are both exporting nations with strong industrial bases, and the governments must find ways to operate with solid budgets.

“The future of the world economy cannot be financed with sovereign debts,” he said. “We have to resolve state deficits and budget deficits because the future must not be based on debt-ridden economies.

“The question, of course, is how we can, as a world community, achieve this normalcy in a coordinated and reasonable way. And that is the main task of the G-20 Summit,” Seidt concluded.

As an advocate against protectionism and trade barriers, Seidt said Germany strongly backs the Korea-EU free trade agreement, stressing that the pact will open up a market of 450 million people from 27 European nations to Korea.

The Korea-EU free trade agreement was concluded last year, and needs to be ratified at the National Assembly and the European Parliament for implementation.

“You will get [ratification], I am convinced, this year,” he said. “At the European Parliament, Germany will give its full support. It is the conviction of my government that during the second part of 2010 this free trade agreement will take effect. We think it is very important.”

As an envoy of a once-divided nation, Seidt also said Germany has paid significant attention to Korea’s reunification process. He added that under the latest agreement between the presidents of Germany and Korea, Berlin has promised to share its experience of reunification.

“After the Berlin Wall went up in 1961, it was a major challenge for the government of West Germany to keep the humanitarian channel open,” he said. He called family reunions between the residents of the Koreas a crucial part of reunification.

He also said that post-reunification, a major task for the German government was improving living conditions for the former East Germans.

“East Germany was much poorer than we expected,” he said. “Factories were outdated and the infrastructure was collapsing. It was a major investment for the future. On the other hand, it was not only a burden, but an enormous chance ... you also have to see the positive prospects for prosperity, not just risks and burdens.”

“And of course, you have here on the Korean Peninsula the highest concentration of military power. You will have the opportunity to cut down on military expenses and military service terms. You will save a lot of money from armaments and military infrastructure, and that’s a major positive effect of reunification.”

Seidt, who had served as Germany’s ambassador to Afghanistan before his arrival to Seoul, said the Korean government’s decision to deploy civilian experts to the war-torn nation is an opportunity for Korea to raise its international profile.

“I believe the Afghan people will welcome the step,” he said, days before the National Assembly approved the plan to send troops and civilian experts to Afghanistan. “Koreans will be welcomed, because you are representing a country that is so successful in economic and social development.

“In many aspects, Korea can be a role model for Afghanistan. Afghanistan was destroyed by war, like Korea was after the Korean War. You recovered, you developed. You built up your country, not only its industries, but also its education system,” Seidt said. “This experience is highly valuable to Afghanistan and they will be very grateful. It will once more demonstrate to the world what Korea has achieved and what you are sharing with the international community.”