Even ‘off-ARCO,’ a bonanza of modern art

Even ‘off-ARCO,’ a bonanza of modern art 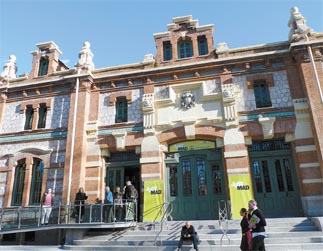 MADRID - First-time visitors to ARCOmadrid 2010 probably made a point of seeing the fair’s main exhibits and the three major museums located nearby: the Museo Nacional del Prado, the Centro de Arte Reina Sofia and the Museo Thyssen-Bornemisza. But Madrid had much more to offer during this annual mega-event.

Satellite fairs such as Art Madrid, Dearte IX and Just Madrid abound, as did exhibitions scheduled to coincide with the five days of ARCO. In fact, a true art aficionado may not even have had time for shopping and tourist spots.

Of particular note is Just Madrid, a contemporary art fair that just started this year, which was held from Feb. 18 to 21 at La Lonja and Nave de Terneras, in the Municipal District of Arganzuela in Madrid.

Independent curator Virginia Torrente, who directed the inaugural Just Madrid, said the fair was “mostly for young, lesser-known and up-and-coming artists who cannot afford to pay for booths at international fairs such as ARCO but want to promote their work internationally, not simply as part of a sales strategy.”

Spanish artist Santiago Ydanez’s “Sin titulo (Untitled)” from the Invaliden1 gallery in Berlin grabbed attention for its new expressionist techniques and gestural brushstrokes, while the Madrid-based Jose Robles gallery featured another eye-catcher titled “Drum” - a film series by Spaniard Javier Fresneda depicting the artist playing drums in the middle of a lake.

Just one or two minutes’ walk from the venue for Just Madrid is Matadero Madrid, a unique and experimental creative art center. The vast space, spanning 148,300 square meters in a former municipal slaughterhouse nearly a century old, is still a work in progress, but eventually organizers hope to make it the city’s biggest center for the creation of contemporary art, according to the City Council of Madrid’s Department of Arts.

When I visited on Feb. 20, the space featured “I Travel to Learn my Geography,” an installation by the Madrid-born artist Mateo Mate who reflects on his existence by showing a toy car with a camera mounted on it constantly turning in an endless loop around a gigantic space that formerly served as a refrigeration chamber.

Another exciting exhibition held simultaneously with ARCO was “La Solitude Organisative” by Miquel Barcelo, one of the best-known Spanish artists in the current international market. The works at the exhibition, held at CaixaForum, dated from between 1983 and late 2009, and included his recent painting of a serious-looking gorilla - a kind of self-portrait.