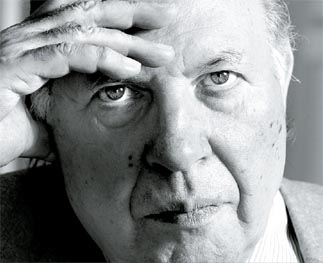 Imre Kertesz is a Hungarian Jewish author and Holocaust survivor portrayed in an exhibit at the Korea Foundation Cultural Center that runs to March 25.

The world has become aware of the Holocaust through various media such as books written by survivors and observers, documentaries like “Shoah,” by Claude Lanzmann, and, of course, Steven Spielberg’s 1993 Oscar-winning movie “Schindler’s List.”

While more than half a century has passed since the historic tragedy, the story of the Holocaust and its message still resonates today, particularly with this year marking the 65th anniversary of the liberation of the notorious Nazi concentration camp at Auschwitz.

The exhibition “At Home Everywhere and Nowhere,” which opens today in Seoul, provides a fresh reminder of what many consider to be one of the most horrific events in human history.

The exhibit, co-organized by the Goethe Institute and the Korea Foundation, displays photographs of Holocaust survivors living in countries around the world taken by Monika Zucht, a long-time photographer for the renowned German magazine Der Spiegel.

The exhibit was derived from a book by the same name - “At Home Everywhere and Nowhere: Interviews with Survivors of the Holocaust” - written in 2006 by Martin Doerry, a member of Der Spiegel’s editorial board.

The book contains interviews Doerry conducted with 24 Holocaust survivors who talk about experiences of unimaginable suffering, alongside photographs taken by Zucht.

The people Doerry interviewed, including Elie Wiesel, a Nobel Peace prize laureate, and Ruth Kluger, a renowned German literature expert, vary in nationality and occupation. Some are survivors of Nazi concentration camps, others were sent abroad for their own safety by their parents when they were children, still others left the country and survived the Nazi years by living in hiding.

“Soon there will no longer be books of this kind. The people interviewed here were all children or young people when doom descended upon them. Soon there will no longer be witnesses like them, for reasons of aging alone. This enhances the value of the book,” Jan Thorn-Prikker, a member of the online editorial staff of the Goethe Institute, wrote in a bulletin posted on the institute’s global Web site. “It can also be a witness to what can happen.”

Doerry and Zucht traveled extensively through Europe and the United States for several years to meet and talk with the survivors, recount their stories and complete the book, the institute said in a press release. 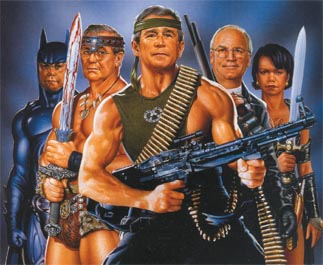 “Bush’s warriors,” which appeared on the cover of Der Spiegel in August 2002, is one of the magazine’s illustrations on view at the KFCC from March 5 to 25.Provided by the organizers

The Seoul exhibition, which showcases 23 photos of the Holocaust survivors interviewed by Doerry, will have a special opening event with the book’s author.

Doerry is also scheduled to hold a public reading of another book he wrote, “My Wounded Heart,” at 7 p.m. tonight at the Korea Foundation Cultural Center.

My Wounded Heart, which also recalls the Holocaust, contains hundreds of letters written by Doerry’s grandmother Lilli Jahn to her husband, friends, and children from 1918 until 1944 - the year when she was deported to Auschwitz and died there.

It also includes more than 200 letters written by her children to their Jewish mother during her imprisonment (1943-1944) at a Nazi concentration camp in Breitenau.

The stack of the heartbreaking letters came into the hands of Doerry via his mother Ilse Jahn, who had inherited them from her brother Gerhard Jahn, the former attorney general in the administration of Chancellor Willy Brandt, upon his death in 1998.

Doerry could not ignore the historical significance of the documents and decided to try to get them published.


The book, which the respected German weekly newspaper Die Zeit has compared to “The Diary of Anne Frank,” has so far been translated into 19 languages, including Korean.

Another exhibition organized by Der Spiegel will be presented alongside At Home Everywhere and Nowhere.

“The Art of Spiegel,” which will be shown for the first time in Asia, will display more than 100 pieces by 60 different illustrators whose works have appeared in the influential German magazine over the past 50 years.

Der Spiegel, which was founded in 1947 and now has more than 6 million readers worldwide, is considered the most significant current affairs journal written in German.

“Not only will the exhibition offer a unique insight into international politics and trends in contemporary history, it will also give one the chance to learn about the work that illustrators and editors put into producing a Spiegel cover,” the Goethe Institute Seoul, the organizer of the event, said in a statement.

*“At Home Everywhere and Nowhere” runs through March 25 at the Korea Foundation Cultural Center in Sunhwa-dong, central Seoul. “The Art of Spiegel” will run from March 5 to 25 at the same venue.