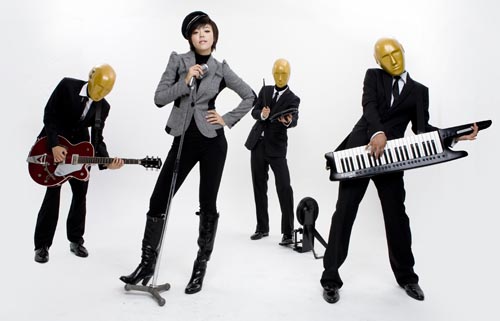 The acclaimed 32-year-old violist has been praised as “ravishing” and “technically immaculate” by critics and is a popular musician in Korea. He has collaborated with many composers including Elliot Carter, Paul Chihara, Mario Davidovsky and many others on recordings and world premieres.

He was the first violist to receive an Artist Diploma from the Juilliard School and currently serves on the faculty of the Herb Alpert School of Music at the University of California, Los Angeles.

Friday to Sunday: “Lee Seung-hwan’s 20th Anniversary ‘Gong’ Concert.” One of South Korea’s most prolific pop artists, Lee Seung-hwan, is back to put on another memorable show for his fans in celebration of the 20th anniversary of his debut.

Lee, a singer, songwriter and producer, is a commercial success and has released more than 10 different singles, albums and EPs that have reached No. 1 on the charts. His debut album, “.?.?. B.C 603,” propelled him to stardom in 1989. He won the New Artist’s Gold Disc in 1991 and since then has held more than 1,000 solo concerts.

March 13: “Pink Martini.” This 10-piece group will make their debut performance in Seoul, just in time for White Day.

Originally from Portland, Oregon, pianist Thomas M. Lauderdale formed the group in 1994 with the intention of playing at political functions in their town. Since then, they’ve been blending Latin, lounge, classical and jazz.

Lauderdale describes the band’s sound as “music of the world without being world music. It’s kind of like urban symphonic crossed with Cuban/Brazilian street Carnival parade, Breakfast at Tiffany’s/United Nations kind of thing.”

Pink Martini made its European debut at the Cannes Film Festival and since then has performed all over the world.

March 13 and 14: “ELLE Girl Festa ? First Love.” ELLE Girl magazine has organized this concert for fans of local indie bands in the Hongdae area and to say goodbye to winter and hello to spring.

There will also be hair and beauty-related events and giveaways.

March 10 and 11: “A Seventh Man.” Korean choreographer Jung Young-doo presents a new dance piece based on John Berger and Jean Mohr’s 1975 book “A Seventh Man.” Jung transforms Berger and Mohr’s study on European immigrant workers into a story everyone can relate to, with themes of separation, survival, struggle, solitude and hope.

In 2004, Jung was recognized as an outstanding young choreographer and won the Grand Prize at the Yokohama Dance Collection in Japan. He persistently continues to examine and refine every dance movement in his repertoire to convey a clear message and universal range of human emotions.

The performances begin at 8 p.m.

Today to March 14: “Riverdance.” One of the biggest box office hits in the world has finally come to Seoul.

This traditional Irish step dance theatrical show has been performed over 10,000 times in more than 300 hundred venues, and attracted audiences of more than 2.2 million over the past 15 years.

More than 50 dancers and musicians from all different cultures and ages will hit the stage with an innovative combination of Irish folk dancing, flamenco and Russian folk dancing.

Riverdance was originally produced and directed by the husband-and-wife team of John McColgan and Moya Doherty, with their production company Abhann Productions, based in Dublin.

In November 1994, tickets were sold in Dublin for the first full-length performance of Riverdance, which opened at the Point Theatre on Feb. 9, 1995. The show ran for five weeks and was completely sold out.

The performance in Seoul starts at 8 p.m. on weekdays, 3 and 7 p.m. on Saturdays, and 2 and 6 p.m. on Sundays. There are no performances on Mondays.

March 6 and 13: “A Night of Shakespeare.” A new theater company, Actors Without Borders, in association with the Seoul Players, presents a special Shakespearean show.

While the majority of the performance will be done in English, there will also be parts in French and Korean.

Actors Without Borders is a group of over 30 expat and Korean actors, directors and technicians under the guidance of Kevin Connors. Seoul Players was established in 2001 as a nonprofit organization to bring English-language theater to Seoul audiences.

The performances will begin at 8 p.m. on both days.

March 12 to 18: “Macbeth.” Director Lee Ho-hyun and conductor Marco Balderi bring one of Shakespeare’s famous plays to the stage in opera form. Cast members include Sung Hyun-ko and Alessandra Rezza.

Giuseppe Verdi’s opera consists of four acts with an Italian libretto by Francesco Maria Piave and additions by Andrea Maffei. It is based on Shakespeare’s play of the same name.

This is Verdi’s 10th opera and also the first Shakespeare play he adapted for the operatic stage.

The performances start at 8 p.m.

The production celebrates the period in which Mozart lived and the atmosphere of this era in a form of authentic 18th-century spectacle.

“Don Giovanni” premiered at the Estates Theatre in Prague in 1787. The opera consists of two acts with music by Wolfgang Amadeus Mozart and has an Italian libretto by Lorenzo Da Ponte. It is known for mixing comedy, melodrama and supernatural elements.

March 13 to 21: Maehwa Village is famous for having the largest amount of maehwa (Japanese apricot) trees in Korea.

When they’re in full bloom, the trees sprout white flowers, known as ume flowers, creating a picturesque scene on and around nearby Mount Baegun.

In addition to taking in the scenery, visitors can purchase organic maehwa products made in the region.

From the Dong Seoul Bus Terminal, take an express bus headed toward Gwangyang and get off at Gwangyang Terminal.

March 18 to 21: March is the time when sansuyu trees, also known as Japanese dogwood trees, are in full bloom in Gurye. Visitors to this festival will be greeted with rows of yellow blossoms that surround the foothills of Mount Jiri.

Sansuyu flowers are made into tea, alcohol and food, all of which visitors will be able to sample. There will also be performances and events including a fireworks display.

From the Seoul Nambu Terminal, take a cross-country bus headed toward Gurye and get off at Gurye Terminal. Then take a bus towards San-dong and get off at Sangwi Village.

March 26 to 28: Jeju’s king cherry blossoms can be seen all over Seogwipo’s downtown area and the surrounding Jeju Sports Complex.

Jeju’s king cherry blossoms have some of the largest petals in the region, but only fully blossom for two to three days.

Come and see the blossoms in full bloom during the festival and stroll down cherry blossom road for a lush and gorgeous view of nature.

From Jeju International Airport, take bus No. 100 and get off at Jeju Bus Terminal. From the terminal, walk about 100 meters (330 feet) toward the rear side of the terminal.