Korean sculptor Ji Yong-ho’s “Bull,” an installation consisting of discarded tires, brought to Madrid by Gana Art Gallery, was a big hit at the ARCO fair, held from Feb. 17 through 21 at the IFEMA exhibition center in the Spanish city. Provided by Gana Art Gallery


MADRID - Only 10 days before the Feb. 17 opening of ARCOmadrid, one of Europe’s biggest contemporary art fairs, news of Greece’s debt crisis spilled across the euro-zone. As headlines screamed about financial disaster, Spain, one of the four big economies of the region, was mentioned in the same breath.

But visitors to the 29th international festival, where a huge variety of masterpieces by artists from the past two centuries were awaiting purchase, seemed hardly affected by the dismal mood. In fact, this year’s ARCO saw better-than-expected sales.

“Sales forecasts were not only met, they were exceeded,” said Luis Eduardo Cortes, the director of Madrid’s IFEMA exhibition center, told the press on the last day of the annual event. ARCO, counted among the world’s top five international art fairs along with Switzerland’s Art Basel and Britain’s Frieze Art Fair, lasted for five days until Feb. 21 at the spacious convention center near Barajas International Airport.

Most art fairs, including ARCO, do not reveal sales figures, with only some exhibiting galleries divulging the value of pieces sold. One of the most expensive works available - of major interest among a broad base of art lovers - was Colombian artist Fernando Botero’s “The Beach,” from the New York-based Marlborough Gallery, priced at 946,000 euros ($1.3 million).

The fair was clearly smaller than previous years. This year, ARCO had 3,000 artists, both established and aspiring, of 25 nationalities from 221 exhibiting galleries. That was in comparison to 238 galleries from 32 countries in 2009, only a few months after the eruption of the U.S. mortgage crisis, and 295 exhibitors from 34 nations in 2008. The fair attracted 150,000 visitors, down from a peak of 200,000 last year.

Even so, the smaller event didn’t necessarily reflect worse conditions. Art critics who have visited the international art fair for many years in a row found the more affordable pieces a boost behind increased sales in a sluggish art market.

“There could be no better timing than now. The prices have probably hit bottom,” said a critic who asked not to be named.

Market researchers estimate art prices are down about 40 percent from their peak in 2007 on average.

ARCO Director Lourdes Fernandez pointed to sustained demand from Spanish collectors. “I would admit it’s a very difficult moment and there are many problems economically. But a large portion of collectors are from Spain, perhaps the biggest group in the world. That is something that works anyway,” she said. 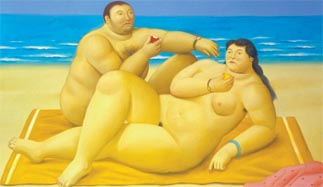 Some Korean exhibitors at ARCO said they opted to risk spending a hefty sum to take part in the selective exhibition. And, for the most part, that decision paid off.

Lee Jang-eun, curator of the Gana Art Gallery, based in Pyeongchang-dong, central Seoul, said, “Many art galleries either gave up participating [in ARCO] or tried to shrink their budgets, but we chose to earmark more of our budget [to bring] a higher number of art pieces, including larger sculptures. And it worked.”

Among the two dozen works on display at Gana’s booth, Korean artist Ji Yong-ho’s “Bull,” a gigantic, heavy sculpture made of discarded tires, won particular attention from the bullfight-loving Spanish audience. “Leon and Matilda,” the latest sculpture by Korea’s Yi Hwan-kwon, also drew an endless line of visitors, including the Spanish crown prince and his wife.

At this ARCO, three Korean galleries - Arario, CAIS and Gana Art - participated in the general program, in which 25 countries displayed works in the historical, avant-garde, classic, contemporary and emerging styles.

When Korea was invited as a guest country in 2007, 14 local galleries showcased works by 38 artists. This year, Los Angeles was picked as a guest with 17 participating galleries, becoming the first guest city rather than country. Since 2007, Gana and Arario have been granted spots at ARCO by its advisory and organizing committees. The CAIS Gallery, based in Cheongdam-dong, southern Seoul, joined the fair for the first time this year.

“Korea is exciting. I saw a very interesting panorama from Korean galleries. In some ways, they have a very important personality, but at the same time they are open to the rest of the world. It was very good,” Fernandez told the JoongAng Daily. 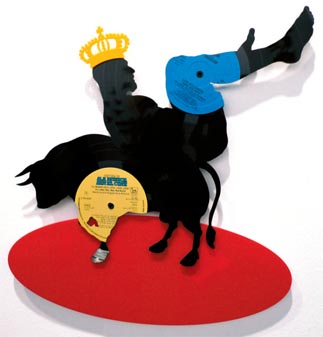 When asked if they are willing to exhibit at ARCO again next year, all three of the Korean galleries said yes.

“Given that ARCO is a state event with the king involved, the audience spectrum is highly extensive and includes not only Spanish but also other veteran European collectors. We would say that is something very special about ARCO,” said Lim Hye-min, a spokeswoman with Arario Gallery.

Arario, which runs galleries in Seoul, Cheonan, Beijing and New York, sold not just Korean art but also the work of other Asian artists such as Nalini Malani of India and Miao Xiaochun of China.

Another Korean gallery, Symyo, joined the fair as part of the special program ARCO 40 - a selection of 40 galleries invited to present the work of up to three young, up-and-coming artists to debut in the past three years.

Sunny Song, president of Symyo Gallery, based in Samcheong-dong, central Seoul, said she “learned expensive yet valuable lessons by participating in ARCO for the first time.”

“What’s universal about art fairs, I realized through this opportunity, is that good works are recognized by anyone,” she added.

Surprisingly, Korea, with 101 exhibitors, was the only country from Asia with booths in the general program. There was no sign of India, last year’s guest country, or Japan. Only one gallery from China, Beijing Space, set up a booth as part of the ARCO 40 program.

“Perhaps it’s the hefty cost of renting a booth that makes it harder for Chinese and Indian galleries to join ARCO. Japan is in a recession, and Japanese galleries are apparently not in a prosperous stage,” said a curator from one of the Korean art galleries at ARCO.

Meanwhile, one of the most controversial pieces on display was “Stairway to Heaven,” by young Madrid artist Eugenio Merino with Barcelona’s ADN Gallery. The sculpture shows a Muslim on his knees praying at the bottom, with a Catholic priest on the Arab’s back kneeling in prayer, and a rabbi on top, standing on the priest’s shoulders.

Although the artist explained that the piece reflects the idea of “the coexistence of the three religions, each making a common effort to reach God on the literal plain,” the Israeli Embassy in Spain issued a statement of complaint.

“An offensive message does not stop the hurt because it pretends to be an artistic work,” the statement said. The work was sold to a Belgian collector for 50,000 euros.

Highlights from Spanish galleries included the work of Rosalia Banet, who drew curious attention for her deceptively adorable installations depicting domestic cannibalism, and those by emerging pop artist Carlos Aires, who was noted for recycling records in his cutouts.