Body parts that were presumed to belong to the dead pilots were found near Daegwallyeong in Gangwon’s Pyeongchang County.

“In the middle of a search and rescue mission, investigators collected some body parts, clothes and boots,” said a defense official who requested anonymity. “We are assuming that all the pilots died from the accident. It will take some time to confirm the identity of the dead pilots since bodies are damaged in jet crashes.”

The official said that the jets were a one-seat F-5E and a two-seat F-5F. Capt. Euh Min-hyuk controlled the F-5E and First Lt. Choi Bo-ram and Lt. Col. Oh Chung-hyun flew the F-5F, the official said. “We have not yet confirmed the exact cause of the accident but there is a high possibility that an aircraft crashed into Mount Hwangbyeong near Daegwallyeong in Pyeongchang due to poor visibility from a heavy snowstorm,” said the official. “We are going to further investigate the cause of the crash.” 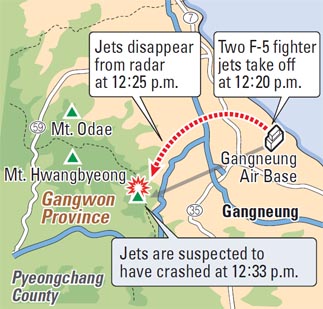 The Air Force said it is looking at four possibilities: pilot error, a midair collision, a loss of consciousness or mechanical problems. Among those possibilities, the Air Force indicated pilot error and a collision are the most likely. The air operation was a training exercise for Choi, a beginner pilot. The Air Force said that the F-5F was following behind the F-5E. Choi was in the front seat and Oh was at the back of the F-5F. “The area near the top of the mountain was very cloudy at the time but above that the sky was clear,” said the official. “It seems that the F-5E went into the cloud while increasing flight altitude and hit the mountain. We assume that the F-5F also crashed due to poor visibility.”

But there is another possibility, according to the official. The F-5F might have lost sight of the F-5E due to weather conditions. After that, the F-5F increased its speed to catch up with the F-5E and may have collided with it, the official said.

The aircraft had taken off from Gangneung Air Base at 12:20 p.m. to conduct maneuvers and disappeared from the radar five minutes later, said the official. Upon losing contact, the Air Force sent two HH-60 rescue helicopters to search for the missing pilots and planes, according to the official. Some mountain climbers reported to local fire stations that they found the wreckage of military jets near the top of Mount Hwangbyeong. Before the discovery, they heard the sound of falling planes and smelled burning fuel at around 12:33 p.m.

It ordered all air bases across the country to suspend flying F-5 aircraft until the investigation is completed.

Two Korean pilots died in 2004 after two F-5E jets crashed in the Yellow Sea, and another four servicemen died the following year as F-5F and F-4E jets crashed into the same sea during separate drills. In November 2008, two F-5E fighter jets collided near Pocheon, Gyeonggi, just 46 kilometers northeast of Seoul. One managed to return to its base but the other one crashed into the ground. The pilot from that jet was able to parachute to safety.