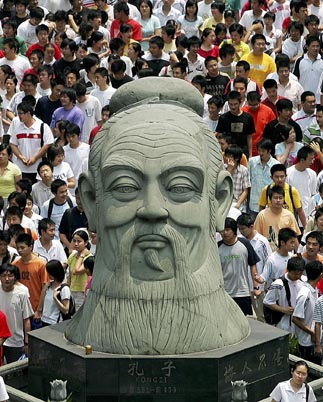 Chinese students pass by a bust of Confucius in Hebei, China. [YONHAP]

The Chinese biographical film “Confucius,” which opened in January, sold fewer tickets than the smash hit “Avatar,” even in China.

Regardless of the success or failure of the film, though, Confucianism is alive and well in China. The grave of Confucius is currently being reconstructed in Qufu. Students of all grades are reading Confucian scriptures in school. Large numbers of intellectuals and scholars are converting to Confucianism.

Some people hope Confucianism will become a tool for political reform or ideology in this day and age, serving as a substitute to communism or democracy. There are 282 “Confucius schools” - or education facilities named after the philosopher that teach the Chinese language - in 88 countries around the world. Some intellectuals even claim that Confucianism should be made the country’s national religion.

Will the dreams of Kang Youwei (1858-1927) materialize? An advocate of reform, Kang claimed that the nation should indeed adopt Confucianism as its national religion and that academies should be established overseas to spread its teachings worldwide.

Even if it does not become China’s national religion, there is a high chance that the relationship between Confucianism and the country’s government will become official in one way or another. If such a connection is cemented, it could stimulate great change, not only in China and in the region but also in the country’s relations with other nations.

Confucianism has not been an important variable in domestic politics or international relations until now.

When the past system was abolished in Korea in 1894 and China in 1905, the link between the state and Confucianism was severed. Everything disappeared - dynamic Confucian fundamentalism, internationally active Confucian movements, the Confucian Party that ranks beside the Christian Democratic Party of the West and all other prominent elements of the former days of the religion. Unlike Christianity or Islam, the core foundation of Confucianism was the state.

Now the Chinese government is trying to use Confucianism as a way to unify the public and support communism, which has reached its limits. Its aim is to prevent Christianity, nationalism or Falun Gong forces from entering the space left by fading Confucianism.

Furthermore, Confucianism can be used not only domestically, but also externally by the Chinese government.

The 19th century was dominated by the United Kingdom and the 20th century by the United States. Now there is a chance that the 21st century will be the century of Asia, which will ultimately be led by China.

But there does not yet appear to be an all-encompassing ideology that will move the Asian century forward. Therefore, the question is whether Confucianism can serve as an ideological base that ties Asia together and presents a unified vision to other areas of the world.

The elements of Confucianism that the Chinese government is currently interested in include social unification and respect for rank and order. This is not enough to make it an international ideology.

In order to upgrade the status of Confucianism, it’s worth taking note of the claims made by Max Weber (1864-1920), a noted scholar who thoroughly analyzed the religion. Weber claimed that Western rationality contributed to the development of capitalism and modernization.

Weber’s point is useful when looking at Chinese Confucianism today, too. The Chinese government is interested in Confucianism because it helps educate people who obey the world or system, and it minimizes social tension.

However, a new rationality and relationship to tension need to be plucked out from the words of Confucius in order to globalize the religion. After filming the movie Confucius, the director confessed, “It was difficult to shoot the film because people have different opinions on Confucius.”

There are indeed many sides to Confucius, and there are many new things to be discovered about him as well.

Until now, development and modernization has meant Westernization. Korea was more Confucian than China at one point. If the Asian century comes, Korea will naturally become an axis. Will the new Confucianism become an ideological background for the Asia century? Watching how the Confucian trend develops in China will provide some insight into the answer.