Political TV: a story of censorship and taboo

Political TV: a story of censorship and taboo 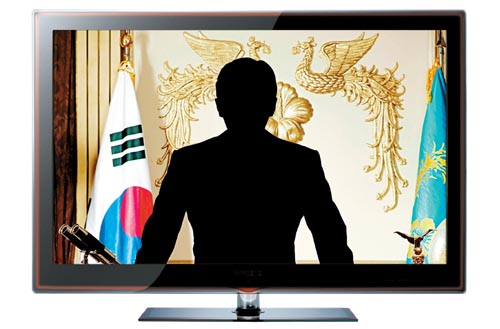 In 2007, a character on a historical drama turned to one of his political opponents and said, “Are you saying you have nothing to lose?” The line provoked a firestorm of comments.

The character was King Jeongjo, the 22nd ruler of the Joseon Dynasty (1392-1910), and the show was “Hanseongbyeolgok” on KBS. And the line was controversial because it closely resembled a comment made by Roh Moo-hyun, who was president at the time.

Even a reference as oblique as that one in a period drama would have been forbidden under the military regimes that governed Korea from the 1960s to the ’80s.

Still, Korea has no realistic “political dramas” in the vein of American shows like “The West Wing,” which aired from 1996 to 2006. That show won a record nine Emmy awards in its first season, and was a huge ratings success, earning more than $200 million for NBC after production costs.

Strangely enough, Roh was a great fan of The West Wing, and he said he would watch DVDs of the show every weekend. After viewing several episodes, Roh reportedly said that the communications depicted between the president and his aides closely resembled his ideal for the Blue House. In fact, at one time, he tried to change the layout of his aides’ offices to resemble the West Wing of the White House more closely.

Korea may not have any present-day political dramas, but it does have period shows that deal with modern history. These got their start on the radio. In 1967, TBC - a now-defunct affiliate of the JoongAng Ilbo - aired “The 20 Years After Liberation,” which explored the events from the end of the Japanese occupation in 1945 to the May 16 coup d’etat by Park Chung Hee in 1961. The drama aired for 10 years, and dealt with sensitive issues such as the political controversy over the 1951 massacre of civilians in Geochang, South Gyeongsang, by a South Korean battalion during the Korean War, negotiations between the two Koreas, and the 1956 assassination attempt on Vice President Jang Myeon by a sniper. Its treatment of taboo subjects made it a huge hit.

In the 1970s, Korea saw its first television shows dealing with political issues, such as “Park Maria,” about the life of the titular character, who abused her husband Lee Gi-bung’s place as a protege of President Syngman Rhee before the couple finally committed suicide together when the April 19 Revolution collapsed the Rhee administration. The producers were determined to show the public the corrupting potential of power. But the Park Chung Hee military regime eventually forced the show to an early end for reasons that were never revealed.

From that point on, Korean political dramas - even if set in the past - faced endless obstacles.

Ko Suck-Man produced MBC’s TV show “The First Republic” in 1981 under the Chun Doo-hwan dictatorship. The drama, which also told the story of the Rhee administration, was actually very close to a documentary, according to Ko, with actors and actresses re-enacting episodes based on facts. He said, “These documentary-like dramas were Korea’s unique form of the political show,” made fictional to give themselves a claim on objectivity and to avoid controversy.

Still, even that often wasn’t enough. Ko recalled that after a certain episode aired, he was summoned by the National Intelligence Service and forced to resign from the producer’s position then and there.

Ko later served as the head of the state-run Korea Creative Content Agency between 2007 and 2009,

The second series in MBC’s “Republic” franchise, “The Second Republic,” started in 1989 under the Roh Tae-woo administration, and since then the network continued recounting modern Korean political history until the last series, “The Fifth Republic,” which told the story of the Chun Doo-hwan regime, aired in 2005.

In 1995, “The Fourth Republic,” set in the 1980s, included then-president Kim Young-sam as a character, a young opposition party leader. It was the first time that an incumbent president had been depicted on TV, and the producers reportedly had difficulty finding an actor brave enough to take on the role.

The final series, “The Fifth Republic,” provoked mixed reactions. Actor Lee Deok-hwa’s charismatic turn as President Chun invited complaints that the show was beautifying the dictator, whereas some former aides of Chun, including Hur Hwa-pyung and Chang Se-dong, accused MBC of distorting history.

Though Korean producers of dramas no longer face direct pressure from the administration, they still risk lawsuits if they choose to depict still-living politicians.

To avoid these difficulties, dramas that depict contemporary politics have begun to incorporate creative details. For example, “City Hall,” which aired on SBS last year, is based in a fictional city, Inju. The protagonist is a young, low-ranking female public servant who is elected mayor.

The crew insists that politics is only a small part of the show, and that City Hall is actually a romantic comedy. Still, the drama slyly commented on timely political issues. Citizens disparage the previous mayor, who spent public funding on his own projects but still won re-election. The protagonist’s comments, that politics are nothing but petty conflict between political parties, clearly reflect the opinion of much of the public.

Despite its sometimes cheesy narrative, City Hall set the standard for a new type of political drama. According to culture critic Lee Young-mi, “Previous political dramas were like documentaries, simply moved from the radio to the TV, but more and more ‘drama-like’ dramas are appearing.”

The nature of Korean historical dramas is also changing along with their political counterparts. As more contemporary shows break out of documentary and tell a fictional story, period series are beginning to incorporate contemporary political issues.

Still, critics say Korea lacks a drama gutsy enough to seriously take on contemporary issues in a modern setting. Why has no one stepped forward to try? Such a show would obviously require a realistic script written by someone familiar with politics.

Kim Han-gill, a writer and former lawmaker, believes, “The West Wing’s success may be credited to its subtle, believable details and interesting scripts. But as of yet, it is difficult to find a drama writer [in Korea] who possesses that capacity.

“On the other hand,” he continued, “one is not simply able to write such a script just by having political knowledge. The entire cast and crew and the writer must work as one team in order to highlight the dramatic facets while maintaining strong, realistic details. Funding is also an important factor.”

Ko said he also believes that Koreans need to adopt a cultural mindset that accepts TV shows for what they are - fiction.

The First Republic producer Ko has experienced both as a producer of a political drama and as an aide in the Blue House, so he offered his vision of what would have happened if The West Wing had been a Korean show about the presidential office in Seoul.

“Korean viewers would have become obsessed with matching fictional characters with certain currently active politicians,” he said, calling this tendency a great burden for the producers of political shows.

Despite these difficulties, two new political dramas are scheduled to be aired this year. “The President” will follow a man in his 50s who goes through a grueling campaign and eventually overcomes obstacles to become elected to Korea’s highest office.

The other one, “Daemul,” is already causing a sensation as it will feature as its protagonist the first female president of Korea. As a human rights lawyer, the character builds up a reputation for fighting social evil, which she rides to the Blue House.

However, the producers emphasized that Daemul, based on a comic book series of the same title, should not be regarded as an earnest political drama - seemingly worried about the audience tendencies Ko mentioned.

Still, the door is far more open to political dramas here than it ever was in the past, with no oppressive dictator to censor television broadcasts. And television production companies have reached the conclusion that the public now increasingly seeks realistic political dramas.

Former lawmaker Kim said that he has been approached to create a “real” political drama. If citizens can tune into such a show that depicts Seoul’s halls of power as they are, Kim mused, perhaps their complaints would grow more measured.