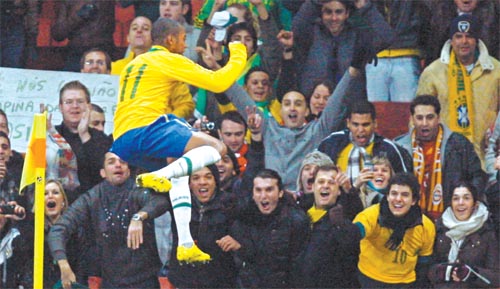 Brazil’s Robinho reacts after the opening goal, during the international soccer match against Ireland at the Emirates Stadium, London, March 2. [AP/YONHAP]

LONDON - Brazil warmed up for the World Cup in impressive fashion as the South Americans defeated the Republic of Ireland 2-0 in Tuesday’s friendly in London.

Dunga’s side were playing their last serious match before kicking off their World Cup campaign against North Korea in Johannesburg on June 15 and, after a slow start, they turned on the style at Arsenal’s Emirates Stadium. An own goal from Ireland midfielder Keith Andrews put the five-time Cup winners ahead just before halftime and Robinho added the second after the break.

For Ireland, facing Brazil was a painful reminder of what might have been as they returned to action for the first time since Thierry Henry’s infamous handball set up the goal that sent France to South Africa at the expense of Giovanni Trapattoni’s men.

It was also a historic occasion as goalkeeper Shay Given and defender Kevin Kilbane made their 103rd appearances for Ireland - taking them ahead of Steve Staunton as their country's most capped players.

Brazil had given England a lesson in smooth passing during its friendly win over Fabio Capello’s side in Qatar last November. But Dunga’s policy of using tough-tackling midfielders such as Gilberto Silva and Felipe Melo ahead of the more flamboyant Ronaldinho showed he prefers to rely on a pragmatic approach rather than to worry about providing entertainment for Brazil's legion of fans.

Players like Kaka ensure there is inspiration to go with the perspiration, and he had the first sight of a goal with a long-range effort that flashed over Given’s crossbar. Ireland was close to taking the lead when Damien Duff’s cross picked out Kevin Doyle and the Wolves forward angled a header that Julio Cesar pushed away.

Brazil threatened when Adriano’s free-kick forced Given into action for the first time. Dunga’s team took the lead in the 44th minute with their only truly incisive moment of the half. Breaking from their own penalty area, the ball was worked wide to Maicon and the right-back slipped a pass that found Robinho just barely onside in the Ireland box.

Left-back Michel Bastos almost got the second goal with a fierce strike from Robinho’s pass, then Daniel Alves should have scored moments after coming off the bench, only for the Barcelona defender to shoot wide after rounding Given. Robinho had the ball in the net in the 68th minute but his effort was ruled out for offside. It wasn’t long before Robinho was celebrating as he finished a sublime move in the 76th minute. He took Kaka’s back-heel and passed to Grafite before bursting into the area to receive the striker’s back-flick and dispatch a finish past Given.