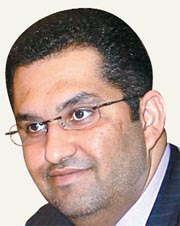 Officials at Masdar, Abu Dhabi’s multifaceted renewable energy initiative, hope to cooperate with Korea on a range of projects, including research and development, manufacturing, project financing and education, they said at a press conference in central Seoul yesterday.

Also known as the Abu Dhabi Future Energy Company, Masdar specializes in the development and commercialization of renewable energy solutions. Founded in April 2006, the campaign aims to make Abu Dhabi, the capital of the United Arab Emirates, a global renewable energy leader. The company is now engaged in a $15 billion project to build Masdar City, the world’s first carbon-neutral metropolis, which will be located 17 kilometers (10.6 miles) from central Abu Dhabi. Officials hope the city will become an industrial cluster fostering investment in and development of renewable energy resources.

“Korea is strong in technology integration and engineering. We want to cooperate with Korea in its areas of strength, such as manufacturing and technology,” said Sultan Ahmed al-Jaber, chief executive officer of Masdar. “We can provide a platform for bringing Korea’s technologies to fruition.”

President Lee Myung-bak visited the city, now under construction, on a trip to solidify a nuclear deal with the United Arab Emirates in December and assured Masdar that Korean companies would be interested in participating in the project.

Yesterday, Jaber came to Seoul for the Korea-Abu Dhabi Economic Forum, which was sponsored by the Ministry of Knowledge Economy, with John Perkins, head of the Masdar Institute of Science and Technology, a graduate-only academic institution focused on renewable energy research.

The institute, which developed its curriculum in collaboration with the Massachusetts Institute of Technology, enrolled its first students last September. Over 90 students from 22 different countries now study there.

“We have the mechanism in place to ensure that the quality of our curriculum is comparable to that available at MIT,” the institute head said.

Perkins added he is excited about the partnership with Korean universities and industries. He is planning to visit Seoul National University, Yonsei University and the Korea Advanced Institute of Science and Technology.