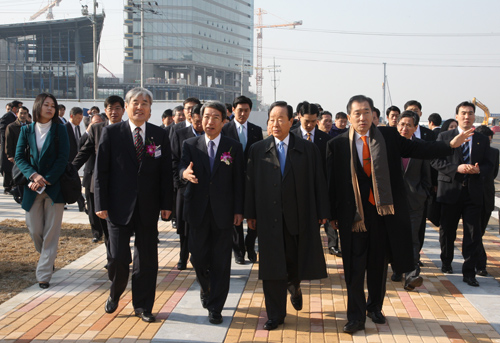 
Yonsei University dedicated its new “International Campus” in Songdo yesterday, the first of a string of local and foreign universities scheduled to open campuses in the Songdo District of the Incheon Free Economic Zone this year.

The prestigious private university based in Sinchon, western Seoul, said its Songdo campus will open in three stages, the first of which was completed last month. The school said that this year, pre-university courses for overseas students and international summer school will be offered, among other courses.

The school is scheduled to finish the final phase in 2013. Next year, the school’s Underwood International School and a new pharmaceutical department will open. After its completion, the Songdo campus will have the capacity for 5,000 people. Yonsei plans to finish all the buildings for the campus by 2013. In September, Songdo campuses for the State University of New York and the University of North Carolina are set to open as well.