Nat’l team gets off to a good start

Nat’l team gets off to a good start 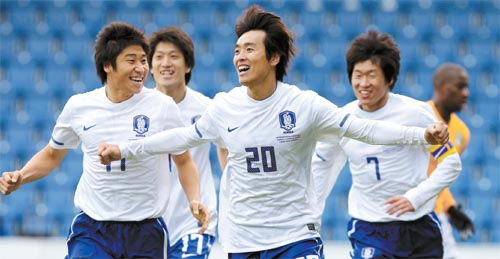 Lee Dong-gook, center, celebrates with teammates after scoring the opening goal of the friendly match against Ivory Coast at Loftus Road in London yesterday. [YONHAP]


National football team manager Huh Jung-moo was pleased with his team’s 2-0 victory over Ivory Coast at Loftus Road in London early yesterday, but he stressed that his players still have work to do if they want to reach the round of 16 at the 2010 World Cup in South Africa in June.

It did not take long for Korea to take the lead as veteran forward Lee Dong-gook gave the game its first goal merely four minutes into the match, scoring on a perfectly timed volley shot off a mistimed clearance header from Ivory Coast defender Abdoulaye Meite.

Defender Kwak Tae-hwi, who was substituted in during the 61st minute for the injured Lee Jung-woo, sealed the game with a header off Kim Jae-sung’s free kick in extra time.

Huh’s side was at full strength with a number of key overseas-based players making the trip to London for the match against the high-ranked African side. Korea took advantage of set-piece plays after play had been stopped, and got help from its defenders, who provided stability in the backfield.

“This game was excellent practice for us before the World Cup,” said Huh. “We played well and it is a good win for us, but there is still a lot of work to do before the Cup.

“We are not meeting again until May, so I gave the players homework. I want them to study videos of the teams we’ll be playing as they all need to improve before we go to South Africa.”

With the defense getting a boost from the return of veterans Lee Young-pyo and Cha Du-ri and with plenty of help from midfielder Lee Jung-woo, the defensive unit looked steady in sealing off the better-skilled and speedier Ivory Coast midfielders and forwards. Lee provided veteran leadership while Cha used his speed to cover a lot of ground and advance into the opposing zone on several overlapping plays.

When Lee Jung-woo went down with an injury, Kwak did an admirable job containing the opposing team’s forwards. In the process, he more than made up for the horrendous play in the East Asian Football Championships loss to China.

“Lee and Cha have experience in some big matches and their return stabilized the defense. Organized play let us shut out our opponents,” Huh said after the match. “I was also satisfied with the forwards and midfielders, who closed the gaps and didn’t give the other side many opportunities.”

With Park Chu-young of AS Monaco out with a hamstring injury, Huh went with Lee Dong-gook and Lee Keun-ho to start the match. In the second half, Huh tested veteran Ahn Jung-hwan. “We need a player who can score goals even in dire situations. Although Ahn did not score today, he did not play a bad game,” said Huh.

After the match, the players dispersed, returning to their professional teams. The national team will regroup early for the final 23-man World Cup roster in early May. It will play its final friendly match at home on May 16 against Ecuador at the Seoul World Cup Stadium before travelling to Saitama to face Japan on May 24. The national team will then set up camp in Innsbruck, Austria, with their final tune-up match against Spain on June 3.