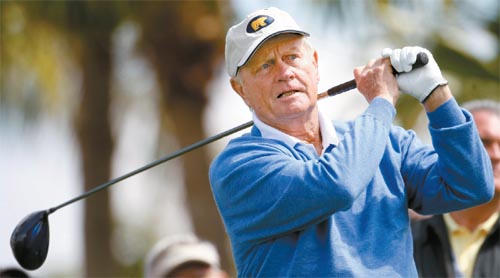 PALM BEACH GARDENS, Fla. - Jack Nicklaus is going to appear at next month’s Masters, and he thinks Tiger Woods will as well.

Nicklaus said Wednesday that “it would surprise me” if Woods did not return to competitive golf in time for the Masters, a tournament the embattled world No. 1 has won four times in his career.

Nicklaus has been reluctant to comment much about Woods since the saga involving revelations of infidelity began late last year, saying more than once that someone else’s private life isn’t any of his business. He reiterated that belief again Wednesday after finishing his Pro-Am round at the South Florida course he redesigned.

A person with knowledge of Woods’ schedule told The Associated Press on Tuesday that Woods returned to his home near Orlando, Fla., over the weekend after a week of family counseling and resumed practicing for the first time in nearly four months.

Like many, Nicklaus seemed to take that as a sign that Woods could be back sooner rather than later. The Masters begins April 8.

“I can’t imagine in 100 years he’s going to miss this,” Nicklaus said. “None of you guys do either. But I don’t know. I don’t know. I’ve been very noncommittal about anything as it’s not my business. But ... my guess is as a golfer he’s going to want to try to play Augusta if he’s got his other things in order.”

Nicklaus has said 2010 would be “a big year” for Woods if he wants to get closer to Nicklaus’ record of 18 major championships. Three of this year’s majors will be on courses Woods has dominated before: Augusta National, Pebble Beach and St. Andrews.

Of Woods’ 14 majors, half have come on those three courses. Woods has never missed a Masters or a U.S. Open since 1995.

Woods was photographed hitting balls at Isleworth on Feb. 18. One day later, he ended nearly three months of silence by speaking to a small group of associates, a statement that got worldwide attention.