The art of money lending

The art of money lending 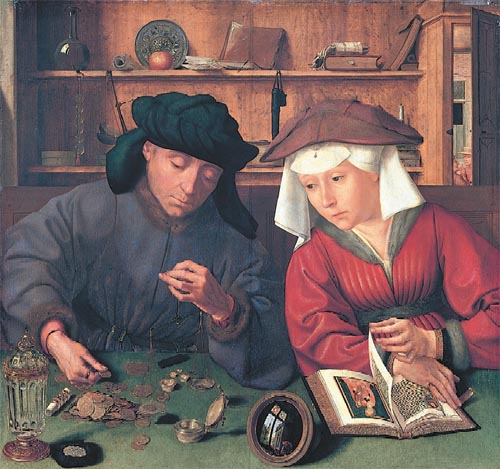 “The Moneylender and His Wife” (1514) by Quentin Matsys. Oil on board, Musee Du Louvre, Paris

Antonio: If thou wilt lend this money, lend it not / As to thy friends; for when did friendship take / A breed for barren metal of his friend? / But lend it rather to thine enemy, / Who, if he break, thou mayst with better face / Exact the penalty.

The English playwright stood by Antonio, reprimanding Shylock at the end of the play. Shakespeare would not have been alone; many philosophers of ancient Greece and most Roman Catholic theologians in the Middle Ages would also have supported Antonio.

Aristotle said that horses can breed but money cannot, arguing just as Antonio did in The Merchant of Venice that money is “barren.” According to the Greek philosopher, a person had a right to charge a fee when lending a house or a horse, because he is inconvenienced when he gives up either one for a period of time. On the other hand, the philosopher believed that when a person lends money, he does not face any inconvenience and sacrifices nothing, as it is just surplus money.

But this theory can be refuted in many ways. If a person who borrowed money from you did business with the money and made a profit, he ultimately made the money “breed.” So why shouldn’t you charge him interest? In addition, if it is alright to charge a fee for a horse, as Aristotle believed, what about a case in which the person who borrows the money uses it to buy a horse? And as Alfred Marshall, a 19th century English economist known as one of the founders of neoclassical economics, pointed out, the person who lends the money is basically giving up the power to buy a horse.

Still, ideas such as those must rarely have occurred to people in ancient and medieval times, because most debtors were impoverished people who had no choice but to borrow money to buy something to eat. 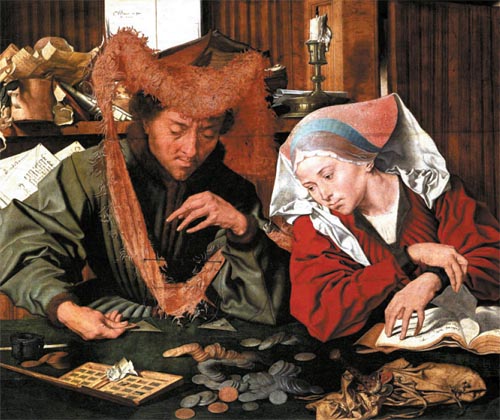 In Exodus 22:25, it says, “If you lend money to one of my people among you who is needy, do not be like a moneylender; charge him no interest” (New International Version). Based on these comments, Charlemagne of the Frankish Empire issued an imperial order to ban usury in the late 8th century. At that time, usury was any kind of interest on a loan.

However, as commerce and international trade developed in the late Middle Ages, people began borrowing money for business, making money “breed” while also raising the question of whether charging interest was a sin. Indeed, in the 13th century, St. Thomas Aquinas, an Italian Catholic priest and influential theologian in the tradition of scholasticism, outlined some exceptions in which creditors were allowed to charge interest on the money they were lending. These included cases in which the person who borrowed the money failed to pay it back when it was due and cases in which the lender suffered damages as a result of having lent his money.

Later, the church added a provision for cases in which the lender could have gained something if he had invested his money instead of lending it out. However, the same could be said for any case in which money is loaned to another, and indicates that the church had begun to allow creditors to charge interest.

Still, the Catholic church had in principle banned interest through its usury doctrine, so it was difficult for Christians to enter the money lending business. It was Jewish people like Shylock who entered what was at the time a “blue ocean” of lending because under the anti-Semitic regulations in place throughout Europe then there were few other businesses in which they could engage to earn a living.

That’s the reason why, in 16th century Europe, many of the lenders holding the purse strings were Jewish, while the demands for funds were increasing sharply amid the rapid development of commerce and trade. That is the situation depicted in The Merchant of Venice.

Finally, some Protestant reformists, including John Calvin, a French theologian and pastor, were beginning to say that interest was not illegal, even though they still expressed negative views about people who made a living as professional moneylenders.

And so it was that the 16th century - which was a period of renaissance in culture and the arts and which gave birth to the reformation movement in religion - was also a period in which the public’s view of money lending and interest was both positive and negative.

These mixed views are reflected in a painting by Quentin Matsys (1466-1530), an artist from Flanders. The painting is sometimes called “The Money Changer and His Wife” or the “The Moneylender and His Wife.” This is perhaps because most 16th century money changers were at once moneylenders and comprehensive bankers. 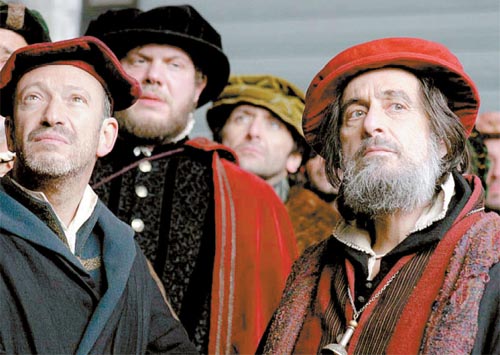 Al Pacino, right, plays Shylock in the 2004 film “The Merchant of Venice,” based on the play by William Shakespeare.

The man on the left side of the painting is busy weighing various coins. What is he doing exactly? He is measuring the content of gold, silver or bronze in the coins to decide their exchange rates.

Antwerp, where Matsys lived, was at the center of international trade at that time. Therefore there was a need to determine the exchange rates for the many coins brought by merchants from all over Europe, and as a result many money changers appeared.

On the right side of the painting, the man’s wife is looking over her husband’s shoulder while turning over a page of what looks like a prayer book because the page we see has a picture of the Virgin Mary and the baby Jesus.

“The shiny gold, pearls [a symbol of lust], and jewelry have distracted the wife from her spiritual duty, reading a work of devotion,” according to the Musee du Louvre, which holds the painting.

Some of the objects in the painting serve as a warning, to the couple and to us. The snuffed-out candle on the shelf behind the wife is a reminder that, like the candle, their lives are burning out and that all of us will die one day, diminishing the significance of things such as the gold and silver being weighed and measured. And the scale used by the money changer to weigh the coins is similar to the one that will be used to weigh the souls of the man and his wife on Judgment Day. In Western art, scales have long symbolized the final judgment.

There are other paintings with nearly the same subject and composition. These were made in Flanders and the northern Netherlands in the 16th century. For example, the work done by Dutch painter Marinus van Reymerswaele (1490-1546) is very similar to that of Matsys.

The Louvre says that these are genre paintings depicting everyday life with an injection of morality. According to the Louvre, “Rather than a descriptive work documenting the subject’s profession or contemporary religious practice, [the Matsys] painting is an allegorical and moral work, condemning avarice and exalting honesty.”

Many art historians share that view, but it is not the only perspective. Manuel Santos-Redondo, a professor of history of economics at the University Complutense in Madrid, Spain, raises the question of whether the money changer and his wife look ugly or ridiculous. In fact, they look too decent to be the target of satire.

However, the painting could also contain elements of both views: promoting the idea that bankers are professionals needed at the center of commerce while also serving as a warning against lending and all other forms of “worldly” financial business.