Myeong-dong travels at the speed of fashion

Myeong-dong travels at the speed of fashion

The hip shopping district of Myeong-dong in central Seoul is already home to many “fast fashion” brands, including Zara, Mango and Uniqlo. But the competition grew even hotter when “fast fashion” giant H&M, which claims the biggest market share in the world, opened up shop there last week.

And it arrived in force, spread across four floors and 2,600 square meters (27,986 square feet) at the Noon Square shopping mall, ready to compete with the 10 fast fashion chain outlets already in the area.

On opening day, fashion-conscious young Koreans lined up starting at midnight to be the first in the new H&M store. When the shop did open, the line by French designer Sonia Rykiel, sometimes called the “Queen of Knits,” sold out in just 27 minutes, according to the branch.

“About 2,500 people lined up to get into the store before opening here. But the line was much longer when we opened a store in Osaka last year - nearly 5 kilometers [3 miles],” said Jeong Hae-jin, a marketing manager at the company’s Korean unit.

With H&M’s entry into Myeong-dong, the competition between fast fashion stores for the hearts and wallets of consumers just got hotter. Indeed, with three branches each of Zara and Mango, both Spanish brands; two Uniqlo outlets from Japan; and a Forever 21 (United States), Myeong-dong has become a global emporium of cheap clothing. 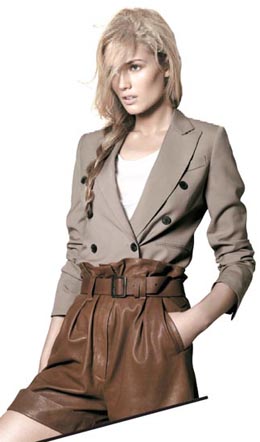 The Spanish fast fashion brand Zara replaces about 70 percent of its clothes with new ones once every two weeks. Above, a model wears clothes from Zara’s 2010 Spring/Summer collection. [JoongAng Ilbo]

SPAO - the Korean brand operated by the E-Land Group whose name is short for “specialty retailer of private-label apparel original” - opened its first branch, a megastore measuring 2,880 square meters, in Myeong-dong in November. It’s the first local retailer to try its hand at fast fashion.

On paper, Myeong-dong seems like an unlikely place for a low-cost retailer, because of the area’s high rents and intense competition for floor space. According to the Ministry of Land, Transport and Maritime Affairs, the most expensive land in the country last year was located on the main strip in Myeong-dong. For that prime dirt, the local cosmetics brand Nature Republic pays about 150 million won ($130,095) in monthly rent, along with a 3 billion won deposit. It’s unknown how much the fast fashion brands pay per month, but three of their stores - Uniqlo, Zara and SPAO - are nearby.

And the neighborhood isn’t just expensive by Korean standards. According to global real estate agency Cushman & Wakefield, Myeong-dong is the 11th most expensive downtown area of all the world’s major cities, by monthly rental fees.

But those exorbitant rents buy access to Korea’s most impressive foot traffic. About 1.5 million shoppers crowd onto the area’s narrow streets on weekdays, and that number surges to 2.3 million on weekends. None of Seoul’s other big-name shopping areas can even begin to compete with those numbers. The COEX Mall in Samseong-dong, southern Seoul, attracts just 200,000 visitors per day on average.

Another factor that sets Myeong-dong apart from Seoul’s more high-class fashion districts - Apgujeong-dong and Cheongdam-dong in southern Seoul - is demographics. Where those neighborhoods south of the river attract fashion-conscious, affluent men and women in their 20s and 30s, among the Myeong-dong throngs can be found people from all walks of life, from their teens to their 50s and 60s. That’s why almost every fast fashion brand except Uniqlo launched its first - and biggest - Korean store in Myeong-dong.

Shelves stocked with sweaters line the wall of a Uniqlo outlet in Myeong-dong. [JoongAng Ilbo]

And it didn’t take long for that Japanese brand, which entered the Korean market with a splash in 2006 through a deal with Lotte Shopping, to see the neighborhood’s appeal. After opening its first stores at Lotte Mart and Lotte Department Store, Uniqlo set up its largest independent Korean store - about 1,850 square meters - in Myeong-dong.

For H&M, a latecomer to the nation’s fast fashion market, Myeong-dong was still first on the list.

“H&M’s policy is to open stores at the best locations,” said Hans Andersson, head of the company’s Korean unit. “In order to show our concept and identity, we opened this huge store.”

When H&M opened its first American store back in 2000, the Swedish retailer chose Fifth Avenue in Manhattan, home to many luxury brands. Even when the financial crisis loomed in September 2008, H&M opened a new shop in Ginza, Tokyo, one of Japan’s most crowded and expensive areas.

For a fashion chain to qualify as “fast,” it typically has to replace about 70 percent of its clothes every two weeks and keep no garments on its shelves for more than a month. But a similar concept has actually been around in Korea for decades at Dongdaemun Market, the wholesale fashion emporium in central Seoul.

All it takes is one celebrity seen wearing a unique T-shirt for retailers at Dongdaemun to mass produce knockoffs and have them on the rack two or three days later. If the T-shirt sells well, retailers produce more, or they stop making it and switch to other items they think will be profitable. The difference between Dongdaemun retailers and global fast fashion chains? They’ve been unable to shake their reputation as cheap and old-fashioned.

For big fast fashion brands, establishing huge stores in expensive areas is just one way to promote their products and build up a modern, luxurious brand identity.

Zara has three stores in Myeong-dong, but each has a different atmosphere.

“The Zara store at M Plaza displays basic lines for men, women and kids, while another Zara store at Noon Square puts the emphasis on female suits and some other high-end labels,” said Seo Min-jeong, an official at Zara Korea’s communications department. “Even though they are in the same location, they have very different images.”

One of Zara’s policies is to keep advertising costs to a minimum and instead open stores in the best locations. Being at the center of popular districts allows fast fashion brands to respond quickly to consumer needs.

Since fast fashion companies make their living producing copies of the latest looks, shops located in areas such as Myeong-dong function as fingers on the pulse of real-time change in consumer patterns and preferences.

Another advantage Myeong-dong has over other areas is all the foreign tourists.

“Shops located on the main road [in Myeong-dong] see between 30 and 40 percent foreign visitors, who usually come from Japan and China,” said Yang Hee-june, an official at Cheil Industries, the local importer of the Mango brand.

“Not every visitor makes a purchase, but it helps us gain profits anyway,” he said, because simply being seen by so many people is a form of indirect advertising.

A reputation for luxury

But there’s more to marketing fast fashion than location. Teaming up with famous designers is another way to burnish one’s high-end image. H&M joined with Chanel art director Karl Lagerfeld in 2004, and collaborations between the two were sold out just an hour after their release. Roberto Cavalli, Jimmy Choo, Stella McCartney and even pop star Madonna have also collaborated with H&M on designs. Uniqlo’s work with star designer Jil Sander under the brand name J+ was also a big hit. In the three days after its release, Uniqlo sold 650 billion won worth of J+ clothes in Korea alone. Fast fashion brands also hire A-list models: Naomi Campbell, Claudia Schiffer and Penelope Cruz have all worked for Mango. This year, Scarlett Johansson headlines the brand’s advertising. Famed Korean idols such as Girls’ Generation and Super Junior endorse local fast fashion brand SPAO.

These prestige efforts help H&M and Zara stay competitive in global brand rankings. According to Interbrand, a global brand consulting agency, H&M and Zara were the world’s 21st and 50th most recognized brands, respectively, last year. That’s lower than Samsung Electronics, which ranked 19th, but higher than Hyundai Motor Company, which was 69th. They still have a long way to go to catch up with Louis Vuitton, at 16th, but they are far higher than the luxury brands Chanel at 59th and Hermes at 70th.