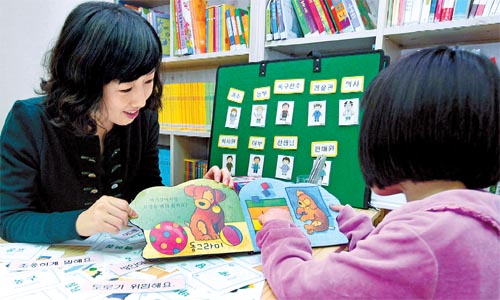 
Hong Ju-min, 7, the child of a Korean father and Filipino mother, took a vocabulary examination at a Multicultural Family Support Center in Ansan, Gyeonggi after attending an entrance ceremony at an elementary school on Tuesday.

The results were not pretty.

Ju-min’s scores were well below the average for first graders. Such students usually score at least 75 out of 100 points on tests of both comprehension and expression. But Ju-min, an alias, scored only 52 and 28 points, respectively.

Tuesday’s test was the second for Ju-min. On last year’s test, the boy was found to be two years behind in language development.

“I visited the center again with my son because I was worried about whether he could follow school classes well because he reads and writes [Korean] poorly,” said Ju-min’s mother, Risa.

Ju-min is not alone. 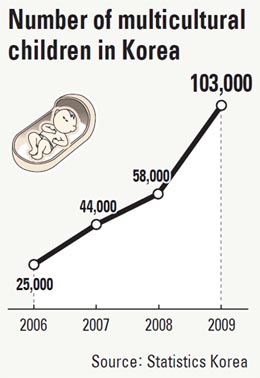 Nearly four out of 10 multicultural children raised mostly by women from Northeast and Southeast Asia and Korean men suffer language barriers by the time they reach elementary school, according to a Health Ministry report obtained by Grand National Party Representative Lee Joung-sun. The report says this is because the children have less exposure to Korean than peers born to two Korean parents.

The report conducted a language development test of 912 children aged between 2 and 6 and found older multicultural children had poorer scores.

By the time multicultural children reach the age of 6, only 32.8 percent were in the normal range. This compares to the 81.4 percent of 2-year-olds who were in that range.

“This is because children use and learn simple, short and easy language when they are younger,” said Jeong Eun-mi, a Health Ministry official in charge of the research.

Language experts said it’s crucial that multicultural children do their best to obtain a language development level equal to their peers born from Korean parents before they enter elementary school.

“When children go to elementary school, they learn by using their logic and inference skills developed based on their language level so they need to have language skills before going to school,” Kim Seong-su, a language therapy professor at Dongshin University of Naju, South Jeolla.

And things could get worse. 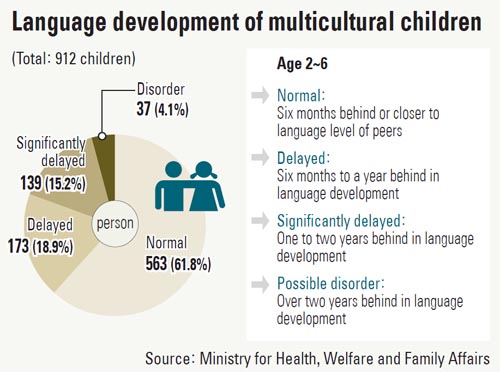 The number of multicultural marriages is rising rapidly, with some 167,900 immigrants married to Koreans as of May 2009, a 15.7 percent increase from a year before, according to statistics by the Ministry of Public Administration and Security.

Experts said it’s important to help these children by taking them to language development therapy at hospitals or multicultural family centers. Choi Mi-ri, a language therapist at a Multicultural Family Support Center in Jeongeup, North Jeolla, warned if the children are too slow in developing their language skills, classes become very stressful. “Those children need additional education sessions and psychological therapy in addition to formal schooling,” Choi said.

Hyeon-ji, an 8-year-old girl born to a Korean father and Japanese mother in Jeongeup, is a case in point. Hyeon-ji’s mom avoided speaking Korean to her for fear that she would teach the language poorly. Instead, Norika Tamura, 42, played Korean videotapes for her daughter. Hyeon-ji was quite slow picking up Korean but her parents didn’t take it seriously.

Not long after Hyeon-ji entered an elementary school in March of last year, Tamura, an alias, received a phone call from Hyeon-ji’s teacher saying that there were many things in class that the girl simply didn’t understand. The teacher suggested that Hyeon-ji take an I.Q. test.

Tamura was shocked after learning that her daughter’s I.Q. was 77. Her peers had average I.Q.s of between 90 and 100.

“Slow language development among children from multicultural families leads to the children’s poor academic performance and this could be a huge social problem when the children get ostracized by peers in classrooms,” said GNP Representative Lee Joung-sun.