The seasonal foods of spring

The seasonal foods of spring

The weather is so fickle these days it’s hard to believe that spring has come. But it has, and in Korea there are several markers beyond the warming weather to confirm this. According to the lunar calendar, we have just passed Ipchun, one of 24 seasonal divisions marking the onset of spring. Today, March 6, marks the start of a new seasonal division called Gyeongchip, when insects emerge from their holes in the earth in spring.

One way to enjoy this time of year is by eating seasonal foods such as spring herbs and seaweed, which are plentiful in the area around Mount Jiri and Korea’s southern coast.

On a visit last week to a traditional outdoor market in Gurye-eup, a town located between Mount Jiri and the Seomjin River, the place was full of life. At around 7 a.m., a group of middle-aged women began to gather, carrying on their heads and backs baskets full of spring herbs, which they said they had just picked from Mount Jiri and the surrounding fields.

“Shepherd’s purse is just delicious when seasoned with doenjang [bean paste] or gochujang [red pepper paste], a little garlic, sesame oil and starch syrup. It leaves a refreshing taste in your mouth,” Kim Young-suk, 53, one of the herb vendors, said.

“You can make a fantastic soup using mugwort, another spring herb, mixed with small shrimp and doenjang,” Choi In-sun, 55, another vendor said. “It has a sweet scent and a refreshing taste. I’ve seen many people eat an extra bowl of rice with it when the soup is served - it’s that good.”

“Cho-oh [Aconitum Ciliare Decaisne, which is a species of crowfoot] is the first spring herb from Mount Jiri to appear. When the herb is boiled with dried pollack, it is good for those who have cold hands and feet,” Kim Hwa-sun, 55, said. “But make sure to let it cool down before you drink it because the herb was originally used to make poison in the old days and it can cause trouble if you drink it when it’s hot.” 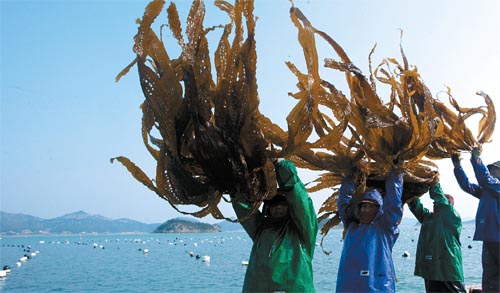 Elsewhere in the province, at a port in Hoejin, Jangheung County, the mudflats and the rocks on the seashore were all a vivid blue. There, two women were busy washing Ecklonia cava, a species of brown algae that is called gamtae in Korean.

“It is fair to say that gamtae is always served here. In this region, gamtae is used for almost all foods, including kimchi and buchimgae [pan-fried vegetable pancake],” said Kim Jeong-ja, an elderly woman who said that she has been gathering gamtae for about 40 years now.

“My children, who moved to the city many years ago, often still ask me to send them some food made with gamtae, saying that they miss the taste,” Kim said.

“Gamtae cannot be raised artificially, which means that it is available only at this time of year, and our job of gathering gamtae will be finished for the year at the end of this month,” she added.

People living by the sea say that for them, seaweed is a sign that spring has come. Seaweed is now in season in Deukryang Bay, which extends from Goheung to Boseong and Jangheung counties in South Jeolla.

Butterbur, second from top, tastes best when it is used to wrap gang doenjang, a thick version of doenjang jjigae (soybean paste soup), and other foods. The astringent taste of wild lettuce, third from top, is just the thing to stimulate one’s appetite. Wild asters, above, have soft leaves that can be used to wrap food.

Deukryang, which has a favorable environment for seaweed growth due to the cleanliness of its water, is known for producing seaweed of particularly high quality. Visitors to the region in spring have the rare chance to taste fresh seaweed before it is preserved with salt. Gamtae and a species of brown seaweed called soemiyeok are both at their best now while kelp and kosiraegi, or sewing thread, will be in season in the middle of this month, the villagers say.

“Unlike other forms of brown seaweed, soemiyeok is usually eaten as ssam [food wrapped in lettuce or seaweed],” said Gang Deuk-young, 46, who has been farming brown seaweed in Deukryang Bay for 12 years now.

“It tastes good when you eat it raw, but the taste is enhanced when you eat it as ssam after it’s been boiled lightly. It is usually used to wrap slices of raw fish or simmered pork, which is just delicious.”

*Seaweed that has been frozen with salt, which is the typical method of preservation, should be soaked in cold water for 30 minutes before serving to remove the salty taste.