A little a day can add up to a big difference

A little a day can add up to a big difference 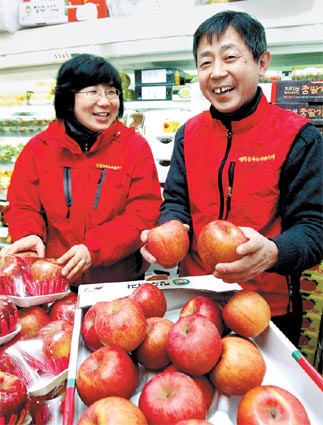 Lee Jun-young, right, and his wife at their fruit store in Gangnam, southern Seoul, last week. By Oh Jong-taek

Lee Jun-young, 47, who runs a small fruit store in Gangnam, southern Seoul, visited the Social Solidarity Bank in Chungmuro, central Seoul, last week and handed in an envelope with 317,700 won ($278) in cash inside.

The money was a month’s worth of receipts from the first customer in Lee’s shop each day. And Lee wants to use it to help other would-be merchants realize their dreams.

“Any petty merchant can provide financial support to a needy neighbor who wants to start their own business just by collecting the money received from the first customer each day,” Lee says.

The bank - a nongovernmental organization established to aid poor people who run or plan to start a micro-enterprise - both accepted Lee’s money and his proposal to create a new account to save any funds so collected.

Lee knows firsthand how helpful a small loan can be. He started his own market in 2008 with an unsecured 50 million won loan from the Gangnam District Office, as the first beneficiary of the its microcredit project.

The financial innovation is believed to have originated with Grameen Bank, established by civic and social activist Muhammad Yunus in Bangladesh in 1976.

In Korea, a civic group first started the program in 1999 and the Welfare Ministry began managing it in 2005 under a new name, “Hope Bank.” The Gangnam office became the first local government to operate the system in 2008.

Lee’s story had begun three years earlier, when he was suddenly laid off from his job in a department store in 2005. For more than two years the one-time street vendor and produce wholesaler looked for work, but to no avail. He was heavily in debt, raising three elementary school-aged children and taking care of his wife’s mother, who had suffered a stroke.

Then his luck changed. He got the loan. And along with the 50 million won, Lee borrowed 25 million won from his relatives, rented a 30-square-meter (322-square-foot) space in front of Younghee Elementary School in Gangnam, and opened a fruit shop.

He did his homework first. Lee made a 10-day survey of a busy store before he opened his doors.

“I watched the number of people who went in and out of the store in certain time periods and the items they bought,” he says. “I even asked shop owners at markets in Euljiro, central Seoul, for advice.”

Lee opened his fruit shop on Dec. 9. His workdays begin at 3 a.m., six hours before he opens the store, and he closes at midnight. About 400 people visit his store every day, and his monthly sales are topping 50 million won.

Lee says you have to know your product well to successfully compete with the big franchise groceries. “You have to be able to explain exactly why the pomegranate is good for the body and how tomatoes control cancer cells,” he says.

And he says that trust and heartfelt service are important.

“I tell my customers the exact date the fruit first came in the store. I never lie,” he said. “And even though I don’t know when my wife changes her hair, I notice my regular customers’ hairstyle changes. I even memorize the names of customers’ children and pets.”