For Korea’s first ice queen, a time of pride

For Korea’s first ice queen, a time of pride 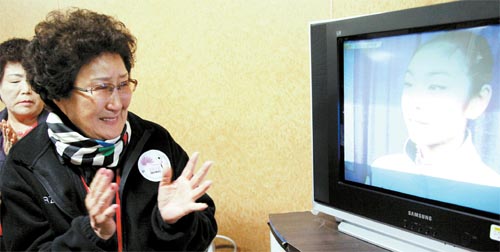 SAMCHEOK, Gangwon - Almost everybody knows that Kim Yu-na is the queen of figure skating in Korea. But few people know that she wasn’t the first.

Hong Yong-myeong was a celebrated, glamorous figure on the rinks from 1948 to 1957, as famous for her bold fashion sense as she was for her athletic style.

Born in 1932 in South Pyongan Province in North Korea, Hong attended primary school in Beijing, and began her skating career there.

When the Japanese colonial period ended in 1945, Hong returned to Korea. Here she quickly became the talk of the town for the tall skating boots and short skirt she wore on the frozen pond at Deoksu Palace, and the crowds of admirers who constantly swarmed around her.

“Boys used to fight over who would tie my boots,” Hong recalls.

After Hong entered the Ewha Girls Middle School, she became a founding member of its figure skating club. From 1948 to 1957, she was the No. 1 skater at the four national women’s figure skating competitions she entered.

“There was no such thing as technique in those times,” she remembers now. “It was a big deal just to do a single jump.”

Her style and prowess brought Hong fame, and with it the dark side of celebrity. After a competition in 1952, her sleeping quarters at her training camp were raided by Army troops who considered her wardrobe too provocative. She escaped and had to flee into the snow and hide under a white sheet. 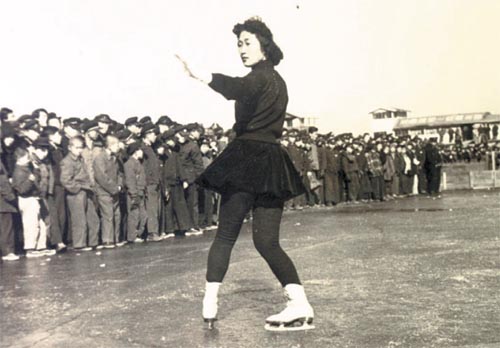 This photo, taken in the 1950s, shows Hong at the height of her career skating in an exhibition on the Han River in Seoul. Provided by Hong Yong-myeong

The next year, police dragged Hong away from a pairs competition practice with Lee Hae-jeong for allegedly demoralizing public values.

Hong began to focus on training other figure skaters, and in 1953 she took five students to the Japanese national figure skating championships in Sapporo.

“We asked them to let us participate in the competition, saying that we were there to learn to skate,” Hong says. “After a demonstration, the head of the Japanese figure skating association said that it wouldn’t be long before Korea overcame Japan in the sport.”

It wasn’t long at all. By 1967, Hong was ready venture out further into the world, and she took her 11-year old student Jang Myeong-su to Vienna for the World Figure Skating Championships. Although Jang was too young to complete, she was allowed to perform in a gala show, and it made her an instant sensation. The attractive Asian girl had lines of people asking for her autograph.

But there were disappointments, too.

“I was upset because even though we, too, were participating athletes, they wouldn’t display the Korean flag anywhere,” says Hong.

It’s better now. She points to a TV screen showing Kim Yu-na’s short program in the Olympics with relief.

“Look at this!” she says. “The Taegeukgi is waving proudly! Yu-na has a beauty that Mao Asada cannot match.

“I’m so happy to have lived long enough to witness this.”