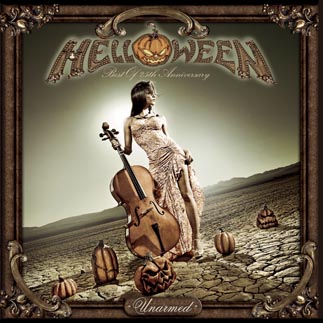 It’s hard to tell which is more surprising: that Helloween, the German speed-metal band, has been around for a quarter century or that the band hasn’t had a “best-of” compilation album for almost 20 years.

Topping them all in the surprise scale is this: on “Unarmed,” Helloween took its signature metal and power ballad tracks, added orchestration and brass, and rendered most of them virtually unrecognizable.

Early hit “Dr. Stein” is a groovy dance number with horns here. “Where the Rain Grows,” an important speed-metal track in the post-Michael Kiske days, has become a soulful, acoustic ballad. The 17-minute “The Keeper’s Trilogy,” a medley of three tracks, “Halloween,” “Keeper of the Seven Keys,” and “The King for a Thousand Years,” is an ambitious attempt, though it would test the patience of casual fans.

The playful Helloween members must have been wearing some mischievous grins as they played these tunes. This record provides great entertainment. But it’s really not for everyone.