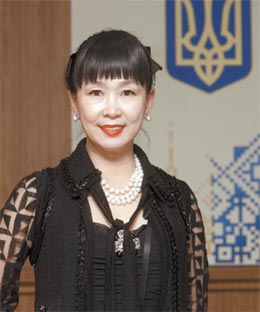 Shim Sil, head of the Ukraine Culture and Art Council in Seoul, was recently recognized for her over 10 years of work. [JoogAng Ilbo]

Shim Sil may be Korean, but she’s spent the past 10 years introducing her home country to the culture of Ukraine as president of the Ukraine Culture and Art Council. On Feb. 23, she was recognized for her efforts with a plaque from Ukrainian Ambassador Volodymyr Belashov.

“Last year, Hankuk University of Foreign Studies inaugurated its Ukrainian department. I am so glad that people are getting interested in Ukraine,” said Shim Sil, president of Ukraine Culture and Art Council.

“I received the order of Olga in 2003. Olga is the name of a wise queen of ancient Ukraine. By taking her wisdom, we should make great efforts to promote cultural exchange among nations.”

She’s brought a number of Ukrainian cultural organizations to Seoul, including the Pearls of Odessa children’s chorus and the National Opera and Ballet Theater of Kiev. She’s hosted exhibitions of art and ancient books and a wine tasting. She even formed a group of Korean CEOs who visited Ukraine three times.

Why is a Korean so eager to promote Ukrainian culture?

“In 1999, I was asked to visit Ukraine by an acquaintance. Fallen leaves were spread under the trees planted along the road, and it was so romantic,” she said. “The Ukrainian vice minister of culture at that time told me the history and culture of Ukraine, and then I looked around there for 10 days. During that time, I saw that their music is just like our Korean traditional music, which embodies deep resentment but dignity at the same time. Both countries have kept their unique cultures despite continued attacks by others.

“In that year, I invited the vice minister, the Ukrainian ambassador in Korea and his wife to Seongnakwon in Seongbuk-dong in central Seoul. While they were staying there, they seemed quite impressed to Korean traditional culture and they said that they would let me lead the cultural center for Ukraine in Korea with pleasure.”

Seongnakwon is a traditional Korean villa owned by Shim’s father, famous for its beautiful traditional garden.

Shim started her career as a fashion designer. Then, as the head of a cultural consultancy firm, she acted as advisor to several important events including a presidential inauguration, a National Sports Festival and an APEC summit. That was how she came to realize the importance of cultural marketing. As Shim is Korean, she is not only interested in introducing Ukrainian culture, also introducing Korean traditional culture.

“The Korean drama ‘Gung,’ which fictionally described the Korean imperial family still alive in our time, was a good try,” she said. “But still, the noble culture of the Korean court is not widely known.”

That was why Shim organized the Korea Integrated Cultural Society in 2005, and she is still chairwoman of the board there. Many people who share Shim’s believes work with her, including the current president of the KICS and ex-chair of the TBWA, Choe Chang-hui; Lee Won, a main line descendant of the Joseon Dynasty royal family; Professor Yoon Dong-gu at the Korea National University of the Arts, second son of the former president Yoon Bo-sun; Art Center NABi director Roh So-young; Sempio Foods Company president Park Jin-sun; and others.

“I will try to expand cultural interchange not just between Korea and Ukraine but also with Eastern Europe and Southeast Asia. For diplomacy, I think that opening one’s mind with cultural exchange is more important than just calculating gains and losses among nations, so I feel sad about the widely used phrase ‘resource diplomacy,’ which lays emphasis on economic relations,” she said.