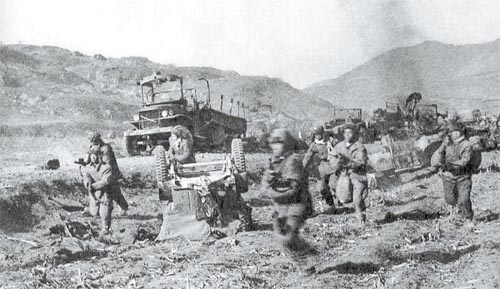 Chinese soldiers move out as they pursue the U.S. 2nd Division, which was trapped in a valley near Kunu-ri. Provided by Paik Sun-yup


Last week, General Paik described the restoration of order in the ranks and the difficulties experienced rescuing withdrawing forces from the advancing Chinese.

Taking a break and getting resupplied at Ipseok, the ROK 1st Division was heading north, crossing the Chongchon River toward Taechon on Nov. 24. An all-out attack order had been issued. The 1st U.S. Corps were still in charge of the western and northern areas of the Korean Peninsula, but there had been some changes in the area of responsibility. To the south of the 1st Corps, the 2nd and 25th divisions of the 9th Corps were now in attack mode, while to the east the ROK 2nd Corps was in charge of operations.

When the ROK 1st Division was heading toward Taechon, there was virtually no resistance from the enemy, to such an extent that it seemed quite possible that we could reach the Supung Dam, our final objective.

When we were passing Bakcheon, Chinese communist forces waiting in ambush started firing on us. The next day the Chinese offense began. It was an intense frontal attack of considerable scale. The two regiments at our front were slowly being pushed back, and as time passed it looked increasingly like they were about to collapse.

When conducting an operation there is one thing that a commander has to avoid at all cost: The division of his own forces. We were in a situation in which units were dispersed and couldn’t be concentrated. Once a force is segmented it’s very easy to collapse. The ROK 1st Division was like a sand castle facing a huge tidal wave. I saw with my own eyes how elements of the 1st Division were starting to withdraw hastily: the first sure signs of panic. Because of the hilly terrain it was impossible to use my jeep. Thus, I practically ran from regimental headquarters to battalion headquarters, telling commanders to get a hold of the situation. After half a day of shuttling back and forth the situation was finally under control. We started to block the Chinese offensive with the ammunition and equipment that we had brought with us from Ipseok. The support fire from Col. William Hennig’s antiaircraft unit helped us a great deal as well. For four days we held on like this. 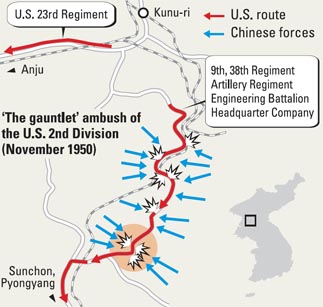 The offensive actions that took place on Nov. 24 were part of the so-called “Christmas Offensive.” The UN headquarters commanding the war from Tokyo thought that it could end the war with this grand offensive. UN and U.S. forces believed that they could spend their next Christmas at home. That is precisely why the way they handled the situation when things weren’t going their way was often clumsy and faulty. This finally led to disastrous results, and it didn’t take long for us to find out how harsh they would be.

The situation surrounding the ROK 1st Division was tenable. The division was acting as a covering force as it had withdrawn from Pakchon and moved to Yeongyu while the U.S. 24th Division was conducting a delayed withdrawal in an orderly fashion defending the area between Pakchon and Taechon. Thanks to these actions, the U.S. 1st Corps was able to withdraw with all its strength virtually intact. The problem was to the east of the 1st Corps, where just a month ago heavy fighting had erupted at the Yeongbyeon bridgehead.

The Chinese communist forces always concentrated their offensive on parties they judged to be weak. That is why throughout the war, the Chinese chose to attack the South Korean forces instead of the American forces, which could muster considerable firepower. The second offensive by the Chinese communist forces was geared toward the eastern front, where the ROK 2nd Corps was active. The 2nd Corps was already weakened because of the Battle of Unsan, while the ROK 7th and 8th divisions had almost disintegrated with no resupply of men and equipment.

The Chinese were well aware of the sorry state of the South Korean forces in that sector and as they attacked, threatened the adjacent U.S. 9th Corps. Facing immense Chinese pressure, the 25th Division of the 9th Corps began a quick withdrawal, but the problem was the 2nd Division.

There were two routes to take from Kunu-ri: a direct eastern route and a circuitous western route. The western route was already packed with withdrawing U.S. 8th Army units and refugees and could accommodate no more troops. The 2nd Division chose the eastern route, but the American commanders failed to take into account that the route, which wound through a narrow valley, could easily turn into a trap if somebody else decided to occupy the area first. The American forces failed to secure the upper side of the valley and protect the withdrawal route. This was the main reason they would suffer their biggest defeat of the Korean War here. Chinese army forces skilled in ambush, flanking and encirclement tactics had already occupied the hills. After the war, the Americans themselves called this disaster the gauntlet, borrowing its name from a practice of Native American Indians who punished a prisoner by forming two lines and forcing the unlucky victim to dash between the rows as they rained blows upon him.

On Nov. 30, 1950, except for the U.S. 23rd Regiment that was following the 2nd Division, most of the division was entering this gauntlet. The Chinese forces hiding in the hills were calmly eyeing their prey. The trap was set.