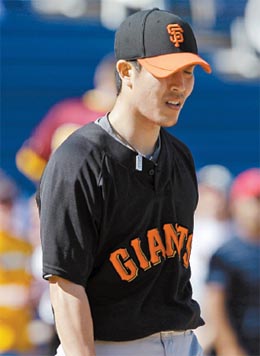 San Francisco’s Kim Byung-hyun reacts after giving up a home run to the Ryan Braun of the Milwaukee Brewers during a spring training game yesterday. [AP/YONHAP]

Kim Byung-hyun, 31, started his quest to earn a spot on the San Francisco Giants roster with a mediocre outing in a preseaon game against the Milwaukee Brewers yesterday in Maryvale, Arizona,

Kim entered the Cactus League spring training game at the bottom of the fifth inning with two outs, a man on third and his team trailing 4-1. In one-third of an inning of relief work, Kim gave up a two-run home run to the first batter he faced, Ryan Braun, and a double to the next batter before managing to end the inning with a strikeout.

The Giants went onto lose the game 12-1.

Having signed a minor league deal with the San Francisco Giants during the offseason, Kim is attempting to make the final cut with a solid showing in spring training.

The veteran pitcher with a submarine delivery had not pitched for a professional club since being released by the Pittsburgh Pirates in spring training of 2008.

The Gwangju native started his MLB career with the Arizona Diamondbacks in 1999. Kim earned the team’s closer role the following season and posted 36 saves for the Diamondbacks in the 2002 season, a career high and franchise record. Kim has also pitched for the Boston Red Sox, Colorado Rockies and Florida Marlins.

The marquee Korean player in the MLB did not fare much better. Choo Shin-soo, 28, of the Cleveland Indians also had a poor showing as he failed to earn a hit in three at-bats in a 4-2 win over the Cincinnati Reds in Goodyear, Arizona yesterday. The right fielder started the game as the third batter in the Indians’ batting order. Choo struck out twice, in the bottom of first and second with men in scoring position. In his final at-bat in the fifth inning, Choo gounded out.

Andy Marte hit a two-run home run for the Indians and veteran infielder Mark Grudzielanek hit an RBI double. Rookie Nick Weglarz chipped in with a run-scoring single to help the Indians to victory.

Park Chan-ho of the New York Yankees did not make an appearance in the game against the Toronto Blue Jays on the same day. The Yankees lost the game 9-1.