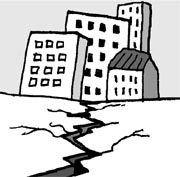 Valparaiso, a Chilean seaport town 120 kilometers (75 miles) from Santiago, is famous for its picturesque scenery. The city was declared a Unesco World Heritage Site in 2003.

Valparaiso gets its nickname “the jewel of the Pacific” from its pastel 19th century houses covering the town’s hills. People who live in the houses have to take special funicular railways to get to the bottom of the hills. Sixteen funiculars climb hills as steep as 60 degrees across the city.

The funiculars, which operate on cable pulley systems, were first installed in the town 130 years ago. That means that the residents of Valparaiso were moving up and down the hills on tram cars during a time when automobiles had not yet been introduced to Korea.

The enormous amount of wealth Valparaiso accumulated made this innovation possible. In the early part of the 19th century, Valparaiso served as a major stopover for ships traveling between Europe and the western coastline of the Americas. People all over Europe gathered there. Charles Darwin’s ship, the HMS Beagle, once anchored there.

The seaport was a marketplace for the export of Chilean silver and copper. This made the city the richest in the country, surpassing even Santiago.

But today, Valparaiso is one of the poorest cities in the region, with one of the highest crime rates in Chile. The old funiculars have not been cared for and creak. And the pretty pastel houses are peeling and stained.

So what happened to the city?

On Aug. 16, 1906, a large earthquake struck Valparaiso. The city was devastated. Thousands of lives were lost. Eight years after the disaster, the Panama Canal was opened. The combination of the earthquake and the alternative trade route led to Valparaiso’s ruin, wrote travel writer Melissa Graham.

On Feb. 27, an 8.8-magnitude earthquake struck Concepcion, Chile, killing perhaps 800 people and destroying many buildings. Shortly after the earthquake, a tsunami over 8 feet high was recorded in the sea near Valparaiso.

Last Thursday, a 6.4-magnitude earthquake struck Kaohsiung in Taiwan. At least 96 people were injured and electricity was cut off to half a million homes.

These disasters come in the wake of Haiti’s 7.0-magnitude earthquake in January, which has claimed the lives of at least 230,000 people so far.

In Korea, too, an earthquake with a magnitude of 3.0 occurred in Siheung, Gyeonggi, in early February. The earthquake is said to have been the strongest ever recorded in the Seoul metropolitan area.

Valparaiso’s plight reminds us of the long-lasting devastation that can be wrought by earthquakes. We must take stronger measures to protect ourselves from natural disasters.