KFB chief: M&A activity in banking sector a must

KFB chief: M&A activity in banking sector a must 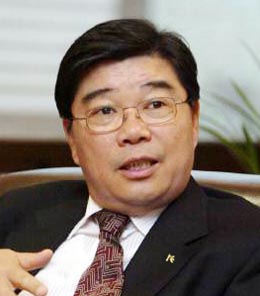 Korea’s banking industry needs to go through a round of mergers and acquisitions down the road to effectively compete against foreign banks, and the sector shouldn’t have to please another regulatory entity aside from the Financial Supervisory Service.

Shin Dong-kyu, the chairman of the Korea Federation of Banks, shared those views during a recent interview with the JoongAng Ilbo.

He stressed that banks here will have to get bigger - largely through M&A activity - for the industry to become a larger player internationally.

“Japan and China have seven and eight banks, respectively, on the list of the world’s 100 largest banks by assets, but we have only three,” Shin said in an interview last Wednesday at the federation’s headquarters in downtown Seoul. “Once a bank gets very large, it can create economies of scale.”

Shin also expressed his strong displeasure with the bill to revise Bank of Korea laws, which will help the central bank reclaim some of its regulatory roles from the Financial Supervisory Service.

“There is no country where financial services companies should serve two regulatory agencies,” Shin said, emphasizing that Korean banks don’t want another “mother-in-law” - a term used here to refer to a boss that someone has to painfully serve and please.

“If the two agencies get involved in a turf war, we will be the ones getting hurt the most in the meantime.”

Shin spoke about the difficulties of his job advocating for local banks and coordinating their agendas with government policies, saying he has to walk a fine line on important issues.

The federation recently wrapped up two important tasks it spearheaded in the banking industry: revamping rules related to outside directors and creating a new benchmark for floating-rate home mortgages in Korea.

The measures covering banks’ boards came after the government shed light on the fact that some outside directors at local banking groups have become permanent fixtures and have started to form chummy relations with executives they are supposed to oversee.

According to the federation’s plan to revamp the industry, announced in January, banking groups will have to regularly report details of their outside directors’ activities - including work-related spending and any donations the firm makes to organizations tied in some way to these individuals. At the same time, external directors are now limited to five years at any one company.

Some banks started complaining about the new rules, characterizing them as too rigid. Others said they amount to by-products of the nation’s largely state-dictated financial policies. Shin, however, dismissed those concerns.

“The new standards merely added one or two more clauses on top of existing commerce and banking laws,” he said. “If you think the new standards are too rigid, that means you haven’t completely abided by the laws in the past.”

Shin stressed that 2010 will be an eventful year for local banks, as the National Assembly is reviewing many legislative measures that could bring about a sea change in the industry.

While more regulations and restrictions are on the way for banks in the United States, Shin said the same strategy should not be employed here in Korea.