How Sejong City became a clash of titans

How Sejong City became a clash of titans 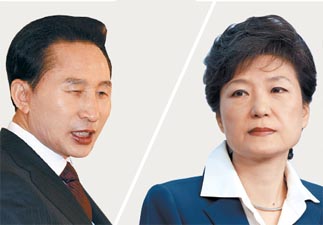 The Grand National Party got its math wrong.

It meant to present one united front behind the Sejong City project. Then the party split into two factions. Now the two have formed a consultative group of six senior lawmakers. And it’s still nowhere close to clear whether the conservative ruling party will take a united path through the complex politics of contentious urban development.

It started so simply. 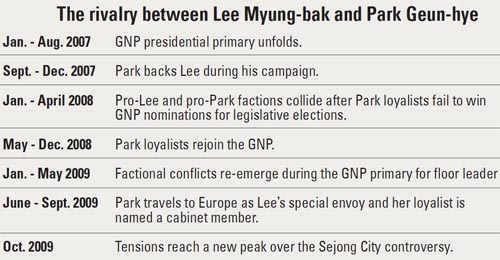 The project was first proposed by then-presidential candidate Roh Moo-hyun in 2002 to win the hearts of voters in the Chungcheong provinces. The initial blueprint required government offices to relocate to Sejong City in South Chungcheong.

The GNP, then the main opposition party under Park Geun-hye’s leadership, backed it.

But last year, President Lee Myung-bak reignited the controversy by announcing that he wanted to rewrite the plan. The old program, he said, would foster government inefficiency. Instead, he aimed to build a self-sufficient science, education and business center.

The Lee administration made public its blueprint on Jan. 11. It just needed its party to back it as an official platform.

That’s when the shenanigans started.

Park, who lost the 2007 GNP presidential primary to Lee, rejected the president’s revision idea. Factions re-emerged. Accusations flew. And a civil war broke out inside the GNP with no sign of an end - or a truce, or even a lull in a marathon of talking. All that’s been decided is that the six-member consultative group will make a decision.

But again, it’s a problem of simple math.

Of the six members, three are pro-Lee lawmakers and three are Park loyalists.

Clash between present and future powers

Why is it so hard for one party to reach a consensus?

The answer may lie in the complex web of Korean politics - present and future. President Lee’s approval rating hovers around 50 percent. But Park’s position, too, is relatively strong. She has been ranked in surveys as the most likely next president.

“I don’t think President Lee decided to bring up the issue to start a conflict with Park,” said Park Sung-min, a political consultant who heads Min Consulting. “Since the days when he was Seoul mayor, Lee has always complained about the projected inefficiency of the project.”

Lee reluctantly agreed to the development scheme during the presidential campaign in 2007 to win Chungcheong votes. But on Nov. 27 of last year, Lee apologized on live TV for his initial acceptance of the plan.

Kang Won-taek, a political science professor at Soongsil University, said it should also come as no surprise that Park Geun-hye opposes Lee because the GNP, when she was the chairwoman, had backed the initial Sejong City plan.

Kang also said Park is conscious of her political persona. “She has established her image as a leader who lives up to her word. She is called a leader of principle and she wants to keep that image,” Kang said.

Chungcheong, the kingmaker of Korean politics

Experts say what matters in Korean politics - past, present and future - is the sentiment of Chungcheong voters. Perennial regionalism is summarized as a confrontation between Gyeongsang and Jeolla politicians, and Chungcheong has historically enjoyed the position of kingmaker.

“The Chungcheong region has a smaller population, so it’s difficult for it to produce a president on its own,” consultant Park said. “Historically, it has maintained an alliance with other regions.”

While the Sejong City controversy reflects only a part of Korea’s political landscape, Chungcheong voters’ sentiment does matter in the next presidential election, Park said. He also said Park Geun-hye enjoys popularity in Chungcheong, and she won’t likely lose her strength there. The daughter of former President Park Chung Hee, she also maintains a stronghold in the Gyeongsang region.

“Chungcheong people tend to see Park as one of their own. Her mother, former first lady, Yuk Young-soo, is from the region, as is Park’s relative, Kim Jong-pil, another political heavyweight. She is still the most influential and favored politician of Chungcheong.”

Professor Kang agreed. “In the long term, how Chungcheong people react will influence the next presidential election. Because Chungcheong is strategically important, the pro-Lee and pro-Park factions will try their best to lure voters,” he said.

Experts do not foresee Lee becoming a lame duck in the immediate future - even if he doesn’t push through his development plan - but some believe the Sejong City issue is a double-edged sword for Park.

“I think it’s more of a crisis for her,” said Park, the political consultant. “Her approval ratings continue to drop. She is losing more and more GNP supporters, particularly the conservatives.”

After the government announced its new Sejong City blueprint on Jan. 11, surveys showed that Park’s approval rating was falling quickly. Realmeter, a polling company, conducts weekly approval ratings of potential GNP presidential candidates, and Park’s rating went down from 41.9 percent on Nov. 27 to 40.4 percent on Jan. 8 and to 38.7 percent on Jan. 15. On Feb. 26, she hit a low of 29.7 percent.

“Some of Park’s supporters moved to other GNP politicians,” said Lee Taek-soo, head of Realmeter.

“If the revision bills are voted down, it will hurt her,” Park Sung-min, the political consultant, said. “The government and the public will blame her. The new development plan, in fact, was received positively by the public. When it was first announced, about 70 percent of the nation backed it, although that went down a bit because Prime Minister Chung Un-chan made some political blunders and lost Chungcheong’s trust.

The consultant said that while Park’s public approval rating appears to have gone down gradually, inside the GNP it plummeted. “Opposition parties are somewhat backing her at the moment. This may become an issue in the future GNP presidential primary,” he noted.

Puzzle with no easy solution

Whatever the cost in political capital, the Sejong City issue has put Park back in the spotlight, and Kang Won-taek of Soongsil University said that’s never a bad thing for a politician.

“Lee’s main rival is no longer the Democrats. Park is the rival. The Democrats are actually suffering the most damage, because their existence has been erased,” he said.

Political experts said the Sejong City puzzle, intertwined with the power struggle and the 2012 presidential election, won’t be easily solved.

“It is premature to talk about the presidential candidacy because the Sejong City issue has not been resolved,” said Kim Hyung-joon, a political scientist at Myongji University.

Either Lee or Park must give in to resolve the Sejong City issue, but the chances of that are slim. “Taking into account her political style, it won’t be easy for Park to step back,” Kim said. “That means Lee has to concede, but will he?”