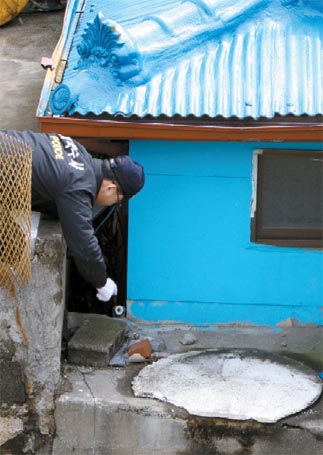 A crime-scene investigator searches the site yesterday where a 13-year-old girl was found dead inside a water tank 11 days after she had gone missing. Her body was found only 100 meters away from her home in Busan. [YONHAP]

A 13-year-old middle school girl in Busan who went missing 11 days was found dead on Saturday in a water tank 100 meters (328 feet) from her home.

Police are searching for 33-year-old Kim Kil-tae, a convicted rapist, in connection with the killing.

Kim Hui-wung, an investigator in charge of the case at Busan’s Sasang Police Precinct, said an initial post-mortem examination has uncovered physical evidence that victim Lee Yu-ri was raped and strangled.

“Investigators believe [the rape] took place close to where her body was dumped,” investigator Kim said in press briefing yesterday.

The exact cause of the death will be announced after forensic experts finish an autopsy.

Lee vanished from her home in Deokpo-dong in Busan’s Sasang District after she had a chat over the phone with her mother surnamed Hong, 38, around 7 p.m. on Feb. 24.

Police have been investigating the case as a kidnapping after they found evidence of a break-in at her house and apparent footprints of an intruder.

That Lee’s cell phone and her glasses that she always carried with her were left in the house also hinted at a kidnapping, investigators said.

Fearing that the missing girl would be killed by her captor if her case became public, police initially kept the matter secret until they opened a formal criminal investigation on Feb. 27.

Police on Feb. 28 named Kim Kil-tae as the prime suspect after they found fingerprints and other evidence at the girl’s home.

Kim had served 11 years in prison for rape. He was released last June after serving eight years of that sentence. His victim in that case was a woman in her 30s.

“Because the suspect has been living in the Sasang District area and committed crimes in the area before, we believe he didn’t go far and he is probably hiding nearby,” said the chief investigator Kim Hui-wung.

When Lee’s body was found by investigators at 9:20 p.m. Saturday, she was undressed and covered with calcium carbonate.

Her hands and feet were tied with red ribbon typically used for gift wrapping. The water tank was full of black vinyl bags and pieces of Styrofoam.

They had centered their search on empty houses in the area. They spotted Kim in one house on March 3, but he managed to escape.

Police initially put up a 5 million won ($4,390) reward for information leading to Kim’s arrest, but raised the amount to 20 million won on Friday.