All that’s left of a Silla queen

All that’s left of a Silla queen 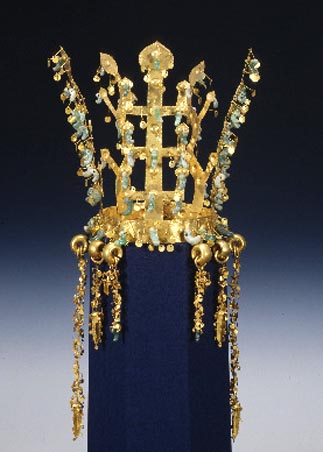 Excavated from Hwangnam Daechong, the biggest royal tomb in the ancient Silla Kingdom capital of Gyeongju, South Gyeongsang, this golden crown is National Treasure No. 191. Because it was found along with a larger number of rings and other accessories in the northern part of the tomb, experts believe it belonged to a woman.

These golden crowns are some of the most important artifacts for tracing the political history of the Silla Kingdom (57 B.C.-A.D. 935), as well as the individual social identity of the tombs’ owners. This crown consists of three tree branch-shaped and two antler-shaped ornaments. Their rims are decorated with golden dots, and three golden nails hold together the decorations. A number of small, bean-shaped jade pieces are attached to all parts of the crown, adding to its splendor.


*The photos and texts for Treasure Trove is provided by National Museum of Korea. For more information, you can call 02-2077-9000 or visit www.museum.go.kr