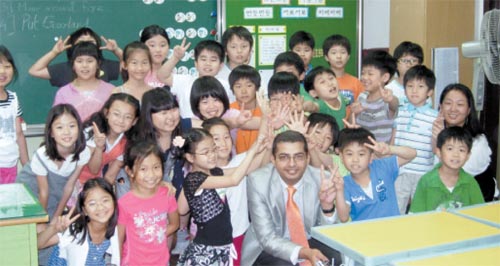 Office worker Sudhir Tejwani travels to different schools on Saturdays, giving presentations on the culture of his native India. Provided by the Seoul Global Center

Sudhir Tejwani is like many expat professionals in Seoul. He works long hours for a big company that values his ability to build business overseas. He wears dark suits, rides the subway and gets home at about 7:30 at night.

But Tejwani stands out on Saturday mornings. That’s when he gathers games, clothing, food and music from his native India and visits elementary and middle schools around the city.

“Basically I enjoy children’s company,” he said recently over coffee.

Tejwani is one of about 20 regular volunteers in the Seoul Global Center’s Neighbors From Afar program.

Tejwani sees it as a way to reach children while they are still open to accepting other cultures.

SGC Cultural Exchange Team coordinator Chris Ahn says that is in line with the program’s goals.

“Young students are kind of like sponges to understand and observe cultures,” she said. “So if they are educated early on, they have less prejudice about foreign countries.”

Ahn said fighting prejudice becomes more important as the number of foreigners in Korea grows. And the program helps. Ahn offered the example of an Australian volunteer who took vegemite, a dark spread made from yeast, to a school and let students try it. A Korean boy tasted the iconic Australian spread and said he understood how it was possible for foreigners not to like kimchi, Ahn said.

Seoul Global Center targets schools in parts of the city where children don’t have many opportunities to interact with foreigners.

Ahn sends a notice to the Seoul Metropolitan Office of Education every March inviting teachers to apply to the program. But she is unable to meet every request, she said.

“The hardest thing is to recruit foreign volunteers,” Ahn said.

Despite the training they receive, Ahn said some volunteers may feel preparing a presentation to engage children for 90 minutes may be too much of a burden. Tejwani agreed that in the initial stages developing a presentation was hard. “Unfortunately for this purpose, India is too big and complex,” he said. “It would not be wrong for me to say that half of Indians don’t know what India is.”

To overcome the challenge, he chose to focus on a few simple concepts. He makes his presentation as interactive as possible, and looks for ways to link Indian culture to Korea. He also hands out prizes to students who can answer questions about India when he is finished.

On one visit, a student looked at Tejwani’s close-cropped hair, clean-shaven face and necktie and nicknamed him “Indo-Obama” after the American president. Tejwani then wrote that on the board in Korean.

“So far I have not had a boring class,” he said. “Even though I am physically exhausted, I gain a lot of mental energy out of it.”