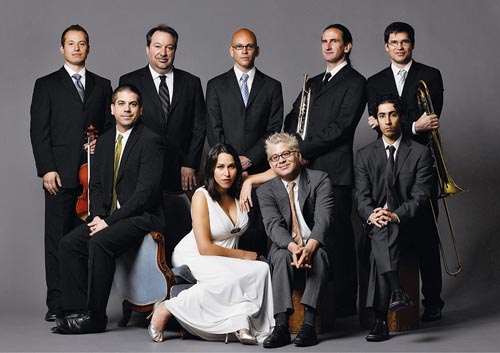 
Listen to a Pink Martini album with no background information, and you might think you’re hearing a compilation of world music through the decades.

But in fact this is a single band: a 14-piece mini-orchestra that blends a wide variety of musical genres, from jazz to classical, Latin, pop and lounge.

Formed in Portland, Oregon, 16 years ago, the band will perform in Seoul for the first time this Saturday, on the eve of the romantic holiday White Day - for which Pink Martini says they’ve prepared a few treats.

“Korean audiences can expect to travel all around the world for the price of one concert ticket. Our music includes all different genres in many different languages,” said China Forbes, Pink Martini’s lead vocalist and songwriter, in a recent e-mail interview with the JoongAng Daily. “Our Korean fans should expect a lot of dancing, too.”

Forbes is one of founding members of the band. She met the leader, Thomas Lauderdale, while the two were studying at Harvard University. The band came together in 1994 to play at political fund raisers. Its four albums, the latest of which is “Splendor in the Grass,” released in October last year, have sold over 2 million copies worldwide.

Q. Why do you enjoy singing in so many different languages?

A. The band is formed with people from so many different cultural backgrounds, and many of us in Pink Martini also have studied different languages. In my case, I love to sing in Spanish. So it’s quite natural for us to sing in various languages other than English.

Where do you get inspiration?

Anywhere from a foreign film, a movie someone is watching with great music in it, or just a beautiful view. My son also always inspires me, so basically, we get influences from all different places. We also inspire each other. We have 14 musicians with different musical and cultural backgrounds, and it really motivates us to become better musicians. Some like Latin, some like classical music, and some like jazz. We constantly influence each other.

Some of your members juggle Pink Martini with other occupations.

There’s one who owns a wine bar, for example, and others... perform in other bands as well. Thomas has been politically active and involved in lots of projects including charity works. I also released a solo album and have been on tours, and actually I’m planning to do a cooking show on the Internet as well. I might try to shoot my own cooking show in Korea - making mandu [dumplings].

Reworking the Japanese song “Kikuchiyo to Mohshimasu,” you collaborated and recorded in Japan with Hiroshi Wada. Do you plan on any similar collaborations with other Asian artists? Are you interested in any particular Asian musical genres?

Yes. We would be open for the idea. In fact, we have collaborated with a Malaysian artist, Sean Ghazi, and have performed the song “Let’s Never Stop Falling in Love” in Malay, and we actually brought him to our Hollywood Bowl concert to sing with us, too.


*The concert takes place at 7 p.m. on Saturday at AX-Hall in southeastern Seoul. Tickets cost 99,000 won ($87) for both standing or designated seats. For more information about the concert, visit http://ticket.interpark.com/Global.