More expats show up on TV, in music

More expats show up on TV, in music 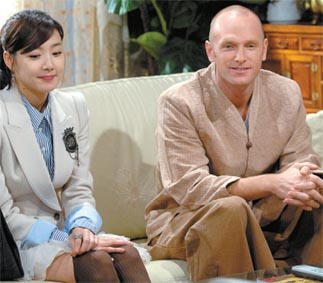 American Michael Blunck, right, played the role of Kyle, who came to Korea to become a monk, in the MBC TV drama “Jewel Bibimbap.” Provided by MBC

As Korea shifts from a homogenous to a multicultural society, Korean TV programs and music groups have begun to feature more non-Korean performers.

Nichkhun, a member of the up-and-coming idol boy band 2PM, has a Thai father and a Chinese mother. Despite his limited proficiency of Korean, the 22-year-old has a huge fan base here. A Chinese singer, Han Geng, known here as Hankyung, a member of Super Junior, is a favorite for many Korean girls.

On the television front, most recently American Michael Blunck played the role of Kyle in the MBC TV drama “Jewel Bibimbap,” which came to an end last month. Blunck, who was a professional wakeboarder in the U.S. before coming to Korea, had never acted before the drama, but he took the role because of his fluent Korean. In Jewel Bibimbap he played a character who came to Korea to become a Buddhist monk.

“When planning the drama, we were thinking about having a foreigner because we run into so many foreigners these days in Korean society,” said Kim Jeong-ho, head of the Jewel Bibimbap team at MBC Production.

“I’m tired of seeing foreigners in Korean TV dramas who keep making verbal mistakes and getting panicked from cultural differences. If we [keep portraying foreigners this way], I think we stress the differences between us and them,” Kim said. “Instead, I wanted to portray a foreign character who is very Korean - even more than real Koreans. With such a big foreign population here, I think Korean media will see foreigners from a different point of view.”

Frenchman Pierre Deporte, also known by his Korean name Hwang Chan-bin, was cast as one of the leading characters on another MBC TV drama, “Tamna, the Island.” He played the role of an English man stranded on Tamna, a fictionalized version of Jeju Island.

The KBS talk show “Chatting Beauties” has also settled down as a gateway to celebrity status for good-looking expat women. First aired back in October 2006, the prime-time talk show has produced many stars, including Christina Confalonieri from Italy, Eva Popiel from Britain, Luvada Dunford from Canada, Taru Salminen from Finland and Bianca Mobley from the United States. Mobley has a Korean father and an American mother.

The “beauties” often make appearances in other TV shows, fashion shows and commercials. Confalonieri even published a book in 2008 about her lifestyle here. Based on her popularity, the 29-year-old Italian was appointed head of the Yeoksam branch of Seoul Global Village in April 2008.