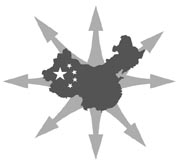 In 1895, during the first Sino-Japanese War, German Emperor Wilhelm II was terrified of the growing power of Asia. He called on Europeans to unite against Asia or else find their continent’s civilization destroyed.

The kaiser wasn’t the first Westerner to fear Asians. Records show that Europeans were horrified when the Mongols invaded Europe in the 13th century. But Wilhelm II is credited with coming up with the idea of “Yellow Peril,” so called because of the belief that a powerful and expanding Asia threatens the existence of Western civilization.

This idea has been popular at various times in history, such as when Japan and Russia clashed over territory in the early 20th century. After the attack on Pearl Harbor by the Japanese army and even in the 1980s, when Japanese business executives bought up U.S. properties, the phenomenon spread like wildfire.

So in the past, the supposed threat from Asia came mostly from Japan. But nowadays Westerners really fear China. It is now unacceptable for the leaders of nations to be openly racist, but economists in the U.S., Europe and even Japan cannot hide their Sinophobia.

If you look at a map of GDP wealth put together by scholars from the University of Sheffield in England and the University of Michigan in the U.S. (www.worldmapper.org/display.php
?selected=169), the reason for their Sinophobia is obvious.

The map - one of a collection of maps where territories are enlarged or shrunk according to certain variables - displays which territories in the world have the greatest wealth when GDP is compared using currency exchange rates.

India and China were both prosperous empires in the first century. China had 26 percent of the world’s wealth. In the 1500s, around 100 years before the Japanese invasion of Korea, China was also a great empire along with India. China, however, became on one economist’s GDP map a country similar in size to Japan in the 1960s. Surprisingly, China is shown as a country bigger than the U.S. in a map projecting nations’ GDPs in 2015.

IMF statistics do indeed suggest that the day when China’s economy will surpass that of the U.S. is not that far off. What will China do with its newfound strength?

Countries in Asia that once fought wars with China feel uneasy about its rapid growth. The country’s past opponents include Korea, India, the Soviet Union and Vietnam. It occupied Tibet and Uighur territories, which were once independent states, with military forces. Mongolia and Taiwan regard China as their potential enemy, as well.

In China, it is said that books that emphasize the country’s hegemony over peaceful foreign relations are becoming more popular.

It seems that China’s days of political isolation and poverty are numbered. If China does indeed become a threat to other Asian countries and the West, what will happen?

Maybe instead of GDP wealth, it’s better to judge a nation’s power based on a map showing the number of Olympic medals its athletes have won.