For the Hanwha Eagles, pitcher Song is the comeback kid

For the Hanwha Eagles, pitcher Song is the comeback kid 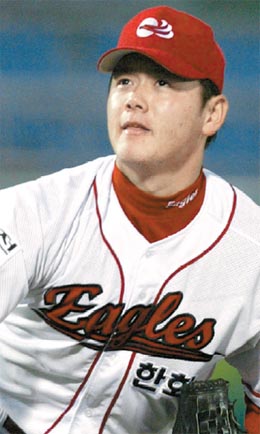 Song Chang-sik warms up before a game in May 2004. By Kim Jin-kyung

Pitchers are supposed to enjoy their peak by their fifth year in the pros.

For Song Chang-sik, it may take a little longer.

Six years after his first pro pitch, and after a three-year retirement from the Korea Baseball Organization, Song is back with the Hanwha Eagles, having signed a 30 million won ($26,460) deal in June.

The 25-year-old was first drafted by the Eagles in 2004, and racked up a respectable first season. But three years later he was diagnosed with Buerger’s disease, an incurable, recurring inflammation and clotting of the arteries and veins in the hands and feet.

Doctors told him he might not be able to continue playing at all. But they didn’t count on Song’s determination.

Drafted straight from Sekwang High School, Song was tabbed as a starter by then-Hanwha manager Yoo Seung-an. He appeared in 26 games, posting eight wins and seven losses with an ERA of 5.13 in his rookie season.

It would turn out to be Song’s only notable year in the KBO. He would undergo elbow surgery after that season, and it took the promising pitcher two years to recover.

Song finally made it back on the mound in 2006 but through the 2007 season, he hurled in a mere 21 innings for the Eagles. Then came the worst realization a pitcher can have.

If he pitched for an inning or two, “My hands felt cold and I lost feeling in my fingertips,” he said.

Song knew something was wrong by the end of the 2007 season. He visited three different doctors, and that’s when he learned he had Buerger’s disease, a rare illness that can affect the arms and legs, sometimes even leading to gangrene and amputation.

The news was devastating.

Song’s career as a pitcher seemed over.

“I was just coming off rehab for my elbow and entering my fourth year. The doctors told me I could play baseball as a hobby but it would be hard to continue to pitch in the pros,” he recalled.

Song retired from the KBO and decided to return to his alma mater, where Min Moon-ki, his former manager, offered him a coaching position. Song took the post but continued to climb the mound on a daily basis.

“To be honest, I wanted to keep in shape and try my luck in the KBO again,” stated Song.

Song’s hard work started to pay off. Last summer, his pitches clocked in at around 140 kilometers (87 miles) per hour. A Hanwha official said, “We got the word that Song was working hard and even taking mound time away from his players to keep in shape.” The Eagles put him through a series of tests and decided to sign him.

Song is currently in good physical condition. He will continue to receive treatment for his illness but despite throwing 200 pitches in an indoor training facility, he doesn’t feel any pain.

The Hanwha coaching staff is planning on evaluating Song in a preseason game soon.

Attempting a comeback after a two-year absence is not easy. Kim Ki-sik, the Yeungnam University and national team ace, suffered from germinoma, a type of a germ cell tumor in the central nervous system, in his senior year. He underwent brain surgery and after two years away from the game signed with the Hyundai Unicorns, but failed to make it to the KBO.

But then there are players who have defied the odds. Sim Sung-bo played for four seasons after being diagnosed with diabetes and Lee Dae-jin, who took seven years to bounce back from a shoulder injury, is still playing in the KBO.