A man of many roles returns to the theater

A man of many roles returns to the theater 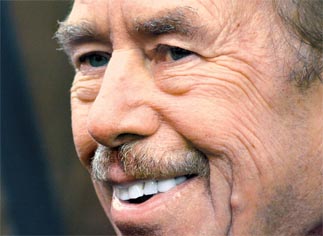 Vaclav Havel, 74, is a well-known symbol of the Czech Republic’s democratization, having led the 1989 Velvet Revolution against the authoritarian communist government and then serving as president of the country (which was Czechoslovakia and then the Czech Republic after it separated from Slovakia).

Even before his involvement in politics, Havel had made a name for himself with his plays, many of which fall into the genre of the theater of the absurd. In 2003, after 13 years of serving as the president of Czechoslovakia and later the Czech Republic, Havel returned to the job of playwright with his first play in nearly two decades, “Leaving,” in 2008. The play was favorably received in Europe and will be presented in Korea next month.

According to LG Arts Center, which will stage the play from April 2 to 4, Leaving was inspired by William Shakespeare’s “King Lear” and Anton Chekhov’s “The Cherry Orchard.” It tells the story of a former chancellor whose life collapses after he loses power.

“Leaving proves that Havel is still capable of producing an excellent absurd drama, which has long been his trademark,” the theater said in a statement.

In advance of the play’s Korean premiere, the JoongAng Ilbo interviewed Havel about the play via e-mail. 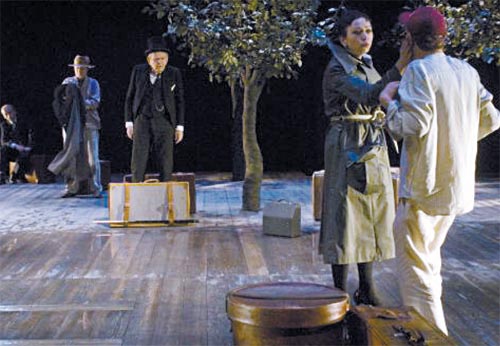 Q. I heard that you haven’t been well. How is your health?

A. The winter months put my health at risk. In prison I suffered severe pneumonia and half of my right lung has been removed, so any infection can easily develop into severe inflammation. [Havel was in prison from June 1979 to January 1984, after he led the civic rights movement Charter 77, named after the human rights manifesto by the same name, in 1977.] At the moment, I am as healthy as can be expected.

You have been a dissident playwright, a revolutionary leader and then a president. When do you feel the most yourself and when are you the most satisfied?

However much the various stages of my life differ from each other, I myself don’t feel it that way. I expect it is because I have always felt I was my own man and that I did everything out of my deepest convictions. Of course there is a difference between being a political prisoner, an independent writer and a president, because in each situation your behavior and decisions have a different impact and affect a different number of people. But if one is concerned about one’s shared responsibility for public affairs and what one may do in a given situation, you will anyway come to the conclusion that you must primarily abide by your own conscience, whether you happen to be in prison or in the highest office of state.

After having served as a president, how would you define power? By contrast, what is the meaning of losing power to you?

I am probably one of only a few politicians who have never yearned for office, nor even considered that I would ever occupy one. What I always wanted was to devote myself to theater and literature and express my attitude to public events by artistic means. But the circumstances in our country turned every free idea into a political event and so I became part of politics without even trying. The revolutionary changes of 1989 thrust me into the office of president, because it is impossible to refuse an opportunity to stop criticizing and start doing things better. My departure from presidential office 13 years later was essentially a relief for me. I will most likely never feel completely free again, because in view of all my experience I am obliged now and then to maintain a diplomatic reticence.

I read that you wrote most of the play Leaving in 1989 before you entered politics. Why did you wait 20 years to have it published?

It’s true that the King Lear-esque theme of loss of status attracted me long before I found myself in top-level politics. I had about two-thirds of the play written, but then came 1989, and after I was elected president I had other things to worry about and I gave no further thought at all to the text. However, after I left office a woman friend of mine brought me the text and the question arose as to what to do with it. So Leaving is not inspired by my immediate experience and my departure from office as it might appear at first sight. I was more inspired by the politicians who were unable to come to terms with losing their posts after the Soviet occupation of Czechoslovakia in 1968.

Are there any changes in the play between the 1989 version and the 2007 version? If so, could you tell us what you have changed from the original text and explain the reasons?

Although I had read through the original text, I didn’t transcribe it or complete it. That is no longer possible 13 years later. I have had to write the whole thing afresh, so it is an entirely new text inspired by the original one.

I heard that you have a role in the play. As a playwright, is there any reason that you decided to use your voice in the play?

That’s an idea I came up with a long time ago, but I didn’t have a clear notion of how to use it, i.e., to incorporate in a play not only the plot and the characters but also the thoughts of the author writing it.

Eventually I linked it together: The author emerges from anonymity and interpolates his own comments into the plot and the actors’ performances.

Some in the media have said that the main character, Dr. Vilem Rieger, resembles you in some ways. Do you think there are similarities between you and Rieger?

I hope that I don’t resemble the character at all.

The media has said that you were going to direct your first film, an adaptation of Leaving. How is the project progressing and when will it be released to the public?

I wrote the screenplay last summer and I am currently completing the technical script. Preparations are scheduled for the spring followed by two months of shooting in the summer and editing in the autumn. If all goes well the premiere should take place in the spring of 2011. The resources of cinema are different, nevertheless, the film should be fairly faithful to the text of the play.

Do you have any other writing plans? What sort of play would you like to write in the future?

If I’m fated to have enough energy, I would like to write another play for the theater. But that’s just an idea, nothing specific.