[In-depth interview] Stepping back into the media spotlight

[In-depth interview] Stepping back into the media spotlight 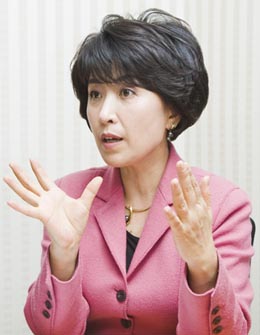 Jung Mi-hong initially built her career in the public eye.

She worked her way into the living rooms of millions of Koreans as an anchorwoman for the 9 p.m. news program on KBS before becoming a primary spokeswoman for the election campaign of Cho Soon, who successfully ran for the mayor of Seoul as a Democratic Party candidate in 1995.

Jung was the first woman to serve as a spokesperson for a Seoul mayoral candidate in the history of political elections here.

She also ranks as the first woman to serve as a public relations director for a mayor of Seoul.

Jung then moved on to become host of a talk show on MBC TV for more than four years in the late 1990s.

But she stepped out of the spotlight in 2000, forming her own public relations agency called J&A.

Now, she is hoping to return to the public eye after a 10-year hiatus in her new role as the chief executive officer of The Coaching Group.

The type of coaching Jung provides doesn’t involve running practice drills or deciding whether to bring in a pinch hitter. Rather, it involves helping clients achieve their potential and discover their latent abilities.

In order to become a professional coach, Jung said she studied day and night for two years like a student preparing for the college entrance examinations.

Jung completed 18 courses - including those covering the cognitive development stages of humans and how people handle emotions - and successfully passed an examination run by the Korea Coaching Association.

Q. After building your career in the media and related fields, you haven’t had much public exposure for the past decade. Was that intentional?

A. As the chief executive officer of a public relations agency, I only focused on running the business. We had more than 300 companies as clients and also handled projects for public institutions and government organizations.

Also, in 2002 we acted as a public relations agency for the 2002 Korea-Japan World Cup games.

To develop the image of a professional publicist, it was important for me not to be repeatedly introduced as a former anchorwoman or spokesperson. For that reason, I intentionally didn’t do any interviews.

What happened to your public relations agency when you established your new company?

I closed most of it but left the advertising section running. I wasn’t happy working in the public relations field. It required endless work, and I didn’t ever really enjoy it.

For the first few years, I liked seeing our sales increase, and I thought it was natural and O.K. to feel exhausted if you wanted to earn some money. I also didn’t want to give up something that I started.

I held on to the company for 10 years, but it was a useless act of refusing to give up. It’s better to abandon something if it doesn’t feel right for you and quickly seek out something that you want.

Is that why you started The Coaching Group?

While I was struggling with lupus disease, I set up a gathering for those who are in same situation as me.

I endlessly hovered between life and death and was lucky enough to survive through it. So now, whenever I encounter people who are in pain or agony of any kind, I can’t help but think up ways to help and support them.

I was in the middle of trying to decide whether to learn lecturing techniques or to take counseling or psychology courses when I discovered coaching.

When I just started learning about coaching, though, I had to deal with another set of troubles in my life. My mother developed a serious illness, and she is still to this day undergoing medical treatment at a hospital.

I was then faced with heavy economic losses related to a failed investment.

I started learning about coaching to help others, but it actually helped me to survive through those difficult times. It helped me to avoid a break-down.

Can you further define coaching?

It seems similar to consulting, counseling or mentoring.

A counselor investigates one’s past, figures out the cause of the problems and then comes up with a solution.

Mentors guide people through certain areas of their life and set out steps that they can follow.

But in coaching, we don’t provide the answers. We give people questions that they can ask themselves in an effort to get them to figure out what they really want.

We start coaching on the premise that everyone has their own answers within them.

We then support and encourage them so that they can realize their capabilities on their own and achieve their goals.

Anyone who wants change and development.

I, however, want to focus on coaching politicians and adolescents. Politicians are leaders who help change society.

It’s their job to present a clear vision and communicate with the public, but all we see on the news is politicians grabbing at each other’s throats and those who are implicated in bribery cases. And most of them are not listeners.

Through coaching, they could master the techniques of persuasion and negotiation. Then they would be able to efficiently conduct state affairs, which would help change the way the public perceives politicians. In the long run, coaching creates a chain of positive effects.

How is your health now?

I took at least 20 pills every morning when I was working for the Seoul city government. Due to the side effects, I used to have a puffy face and even had to wear a wig, as I lost some hair.

But after consistent medical and dietary treatments, I have gotten better. Now I am even preparing to trek to the Himalayas on March 20.

I’d like to return to the TV screen. I was once reluctant to stand in front of TV cameras due to my changed appearance when my illness was serious.

Now, I don’t fear TV cameras because I have almost recovered from the illness. And as for wrinkles, they are natural for my age.

I don’t have to be involved in something high-profile like in the past. In fact, if I have a chance I want to coach people through broadcasting.