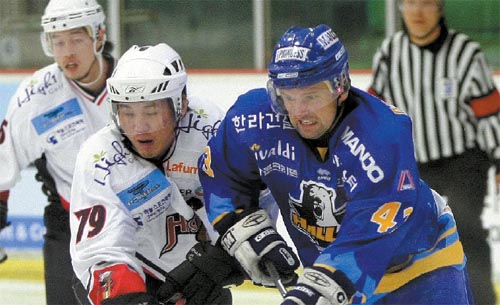 Alex Kim, left, of Chuncheon High1 and Patrik Martinec of Anyang Halla will compete in the Asian League semifinals. Provided by the Anyang Halla

Two Korean hockey clubs will renew their rivalry in the Asian League semifinals. Anyang Halla and Chuncheon High1 will clash at the Anyang Sports Complex Arena tomorrow at 7 p.m., kicking off a best-of-five series for a shot at becoming the first Korean team to win the Asian League title.

Anyang looks to have the edge this time around. The team is coming off its second consecutive first-place finish in regular season standings, and will have the home-ice advantage in the first three games. If the series stretches that far, the final two games will shift to Chuncheon, Gangwon.

“It’s three out of five. You get three at home, and you want to take advantage of it,” said Anyang’s head coach, Shim Eui-shik.

Anyang boasts the best offense in the league with eight players in the league’s top 30 point scorers, and averages five goals per game as a team. Centering Anyang’s line is Czech veteran Patrik Martinec, who was voted the season’s Most Valuable Player and Best Playmaking Forward. Competing in what he has said will be his final pro season, Martinec will look to make amends for the disappointing finish in the semifinals against the Nippon Paper Cranes last season.

Anyang will need strong play from defense, as its goaltending has occasionally looked less than stellar this season. In the last match between Anyang and Chuncheon, goalie Eum Hyun-sung looked shaky in the 4-0 loss. Chuncheon’s forwards Alex Kim and Tim Smith - tied for the league’s most points with 75 apiece - will be looking to take full advantage of Eum once again.