An actor comes into his own

An actor comes into his own 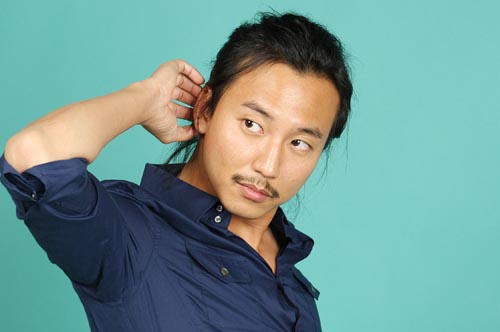 Kim Nam-gil, who won acclaim for his role in the TV drama “Queen Seondeok,” plays a chef who escapes from prison in the film “Last Night,” to be released next month. [JoongAng Ilbo]


Actor Kim Nam-gil has earned the right to be called the busiest actor of this year. After his role in the hit TV drama “Queen Seondeok,” which came to an end late last year, he narrated a documentary trilogy about people living in the Amazon, finished shooting for the film “Last Night,” which will be released next month, and toured countries including Indonesia, Japan and Las Vegas in preparation for a new TV drama that will air this May. He also published a book of essays and recorded a song that was released online.

But life wasn’t always so glamorous for Kim. He was once an awkward 24-year-old newcomer with the stage name Lee Han, which he made up to give himself a more sophisticated image. (The name Nam-gil is considered to be somewhat old fashioned.)

As Lee Han, Kim landed the role of the clueless young husband who dies in a car crash in the 10th episode of the TV drama “Be Strong Geum-soon,” which aired in February 2005. After his tragic hero role, Kim did six more dramas, playing mostly supporting roles, but he failed to leave a strong impression on viewers.

But after four years in the business he had matured, and he landed a role in Queen Seondeok - a role that would soon change his life. When he was cast, Kim made an important decision. Going against the advice of his agent and manager, he decided to drop his stage name and use his real one.

Whether it was this decision to put himself behind his work or his years of acting experience, Kim literally became the life of the show from the first moment he appeared.

In one scene, Kim’s character Bidam snatches a chicken drumstick from the queen and giggles like a 5-year-old. But in another scene, he grins, his face covered in blood after having ruthlessly killed a group of people, and viewers are left to wonder what to make of the character. The only thing they was certain was that the Lee Han they had come to know had disappeared in Kim’s portrayal of Bidam.

Since the season finale of the show, which claimed an audience share of between 30 and 40 percent, Kim has been a busy man. On Tuesday, Kim took time out of his hectic schedule for a public appearance to promote his new film at a press conference.

“Even before I finished reading the script, I wanted to call [director Cho Chang-ho] to tell him that I didn’t want to miss out on the role.”

In the film, Kim plays Su-in, a promising chef who is put behind the bars for allegedly killing his wife, a crime that he did not commit. Su-in manages to escape from prison and hides in a cafe on a remote island. There, Su-in, who doesn’t think he can love anyone again, begins to fall for the woman who runs the cafe.

“I think I’m personally attracted to this type of story,” Kim said. “I tried to create the character based on previous romantic relationships. Whenever I break up with someone, it hurts me so much. But after doing this film, I’ve realized that my love affairs were not as tragic or serious compared to that of Su-in.”

To help him play a chef, Kim took private cooking lessons. But it wasn’t easy for Kim, who says he can’t cook.

“All I can make is ramen. That’s all,” Kim laughed. Along with chopping vegetables and drizzling sauces, Kim said that playing a character who tries to bury his emotions in the presence of his newfound love was daunting.

“I couldn’t laugh or cry hard, and while doing that I had to express my deep emotions for my girl. That was really hard,” he said.

Responding to rumors that he will join the army in June, Kim said he is likely to enter the army between fall and winter, after he finishes another TV drama, “Bad Guy,” which will air in May.

“I’m looking forward to starting my military service because it will give me a two-year break in which I can think about myself and my future.”

The film Last Night will be released in Korea on April 1.