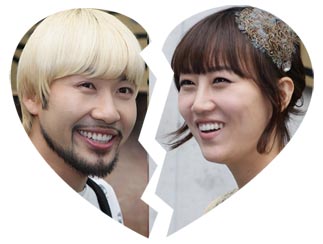 Jang Yoon-jung, right, spoke about her breakup with No Hong-chul at a press event in Seoul on Tuesday. [YONHAP]

Celebrity couple Jang Yoon-jung and No Hong-chul are no longer an item. After the news leaked that they broke up on Tuesday, pop-trot singer Jang decided to open up about her relationship with her comedian ex-boyfriend.

In the face of widespread gossip and speculation over the couple’s split, Jang told her side of the story on Tuesday. Speaking at SBS Public Hall in Deungchon-dong, Gangseo District, eastern Seoul, Jang acknowledged that her 10-month romance with No had come to an end a month ago, but gave no particular reason for the breakup.

“We have no hard feelings toward each other. Our relationship turned into just-friends, not lovers,” she said.

The split between Jang and No was initially acknowledged by Jang’s talent agency, and since then plenty of her fans have been making their own guesses about the reason they broke up. Speculation has focused on irreconcilable differences between the two, and Jang’s parents’ opposition to the relationship, but she denied both claims.

“Since my personality is compatible with his, it wouldn’t make sense to say that we broke up because of irreconcilable differences,” she said.

“No is an excellent man, so there would be no reason for my parents to deprecate our relationship, and we are too old to be influenced by our parents.”

There’s also been speculation that Jang wasn’t as big a fan of No’s as he was of her, since in the past she has spoken publicly about the things she didn’t like about him, such as an obsession with cleanliness and heavy makeup.

The two first revealed their romance last June, a month after it began, and they continued the romance for 10 months, despite the comments from some who said they were a mismatched couple. Jang’s fans in particular felt that she was too good for No, a member of the cast of MBC’s “Infinite Challenge.”

Jang is a popular singer who debuted at the Gangbyeon Song Festival in 1999, winning the grand prize there. Her song “Oh” grew into a big hit and attracted a younger generation to trot music, a style of Korean pop that witnessed a decline in popularity during the ’90s.

No is a regular on many hit variety TV shows for his “quick mouth” and, owing to his interesting fashion choices and hairstyle, is considered to be somewhat eccentric.

No has not spoken publicly on the matter yet and, according to his manager Lee Chang-woon, he is just staying at home, in Gangnam, southern Seoul.