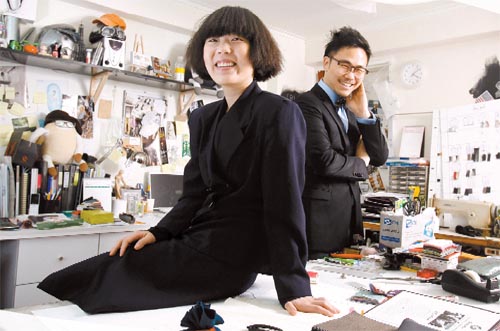 
The studio looked like a vast closet, with garments stacked and hung on hangers everywhere. Pieces of cloth, sheets of paper, pencils, scissors and an old-fashioned iron sat on a table, while bulletin boards laden with countless notes hung on the wall.

“It isn’t messy like this at other times. I hope you forgive the mess. I was working on the clothes for an upcoming collection,” said Chong Jae-woong, the master of the mess.

Chong, 27, is a fashion designer, who last week was busily preparing to present a collection at a “pop-up store” at the Mok-dong branch of Hyundai Department Store. The exhibition began Friday and continues for one week. The collection was one of many projects and opportunities Chong now has to present his brand [BL NK] (pronounced “blank”). 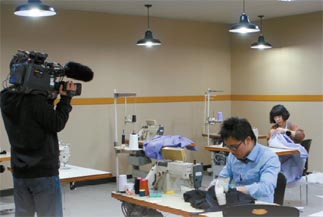 It all began with a TV show one and a half years ago - “Project Runway Korea,” the local version of the hit U.S. reality show.

The first season of Project Runway Korea, which was shot from the end of October to the end of November 2008 and aired from February to April last year, wrapped up to audience acclaim. The local producer, the cable network OnStyle, had only planned to present one season, but the show was so popular the channel decided to create a second. Project Runway Korea Season 2, which was made at a cost of about 1 billion won ($881,000) and features 15 contestants selected from among up to 500 applicants, began airing on Jan. 30 this year, and the three finalists will compete for the win at Seoul Fashion Week later this month.

The setup for Project Runway Korea is basically the same as the original U.S. show. Contestants compete with each other to create the best clothes in a limited amount of time, or to meet theme and materials restrictions, and one or more designers are eliminated each week until only three remain.

A model wears an outfit from Lee’s collection titled “Let Them Speak” for the finals competition during “Project Runway Korea” Season 1.

For Chong and Lee Woo-kyung, 28, the winner of the first season of Project Runway Korea, watching the new season of the show is a nostalgic but somewhat stressful experience.

“While I’m a regular viewer of the show these days, I think to myself - I don’t think I could do it again,” Lee said.

Still, Lee said participating in the show was one of the best things she had ever done with her life, even going so far as to call it a turning point.

“In fact, it was when I was about to quit the fashion industry that I accidentally saw the advertisement recruiting contestants in the Korean version of Project Runway while on a short visit to Seoul in the summer of 2008,” said Lee, who graduated from the Fashion Institute of Technology in New York and was working as an freelance designer before being selected for the program.

“Because the show not only caused me not to leave the industry, but also presented me with a new challenging job, it seemed like fate, and that’s why I call it a turning point in my life,” she added. Lee is now working as style director for JYP Entertainment, the agency that represents Korea’s popular idol groups 2PM and the Wonder Girls. She got the job after winning the on-air competition.

As Chong, who was in the top five in the first season, put it, “For me, the show was like a springboard that enabled me to do and achieve things that I had planned for the future much earlier than expected.”

Chong’s path after the show was very different from Lee’s. Along with his girlfriend, who is also a designer, Chong launched
[BL NK] last July and succeeded in registering the label with five fashion stores in Seoul. He says he’s even made inroads into Singapore.

“I had this dream of making clothes under my own label and communicating with people who are interested in my designs. I would carry it out anyway even if I wasn’t involved in Project Runway Korea, but without the program, it would have taken much more time and effort,” Chong said. 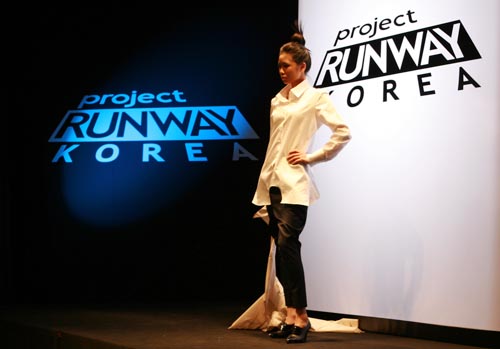 Chong designed this outfit to symbolize Namdaemun gate, currently under reconstruction, for a challenge in which designers were instructed to take inspiration from the city of Seoul. Provided by OnStyle

It was actually Seokwon Andy Kim, a celebrated designer and judge on Project Runway Korea, who encouraged Chong to work on his own brand when he was considering a position with a clothing company after the season ended.

Initially majoring in engineering at Sungkyunkwan University, Chong settled on his current profession at age 24, making him a relative latecomer to the fashion industry.

“While studying engineering at the university, I grew more interested in fashion design. It was when I returned to school after being discharged from the army that I officially began studying fashion design,” Chong said, adding that his father, who has run a tailor shop for about 35 years, was also an influence on him.

“Perhaps that’s why I always try to do more and better [than other designers] - because of the anxiety that I’m quite late,” he added.

According to the two, the reality show tests not only a contestant’s design skills, but also his or her ability to survive extreme situations.

“Imagine - you are not allowed to see your family or friends nor use your cell phone and the Internet for about a month while having to compete with strangers every day. Furthermore, you are expected to create clothes for each challenge and have only one or two days to do so,” Lee said.

“When I saw the original show, I thought that they would give you more time to make the clothes even if they say it’s a two-day challenge. But I was wrong - when they say two days, it has to be done in exactly two days,” she said. “Moreover, your every move is filmed throughout this period, except when you eat or go to the bathroom.”

“I realized why they call it a reality show - it is 99 percent real,” Chong continued. “Time pressure and a lack of ideas are the two most difficult things we had to deal with during the competition.”

Yet the two agreed that what they went through was the best experience that they could ever have as designers.

“The situation was extreme, but limitless at the same time, which means that you can stretch your imagination as far as you want. It is often hard for you to do so as a professional designer in the real world,” said Lee.

Chong concurred. “At that time, all I had to do was just make the clothes, with no need to care about other things such as the sales and marketing of my clothes - which concern me these days.

“All the designers participating in the program acknowledged that it was a tough but fun experience and above all, that it was a once-in-a-lifetime opportunity.”

Then what exactly do the Project Runway Korea contestants think they have gained from participating in the show?

“As for me, Project Runway Korea brought numerous opportunities, including my current job at JYP Entertainment as well as other TV programs where I can show my designs and clothes - which is the best thing that can happen to a budding designer like me,” Lee said.

“Many would-be designers tell me that they were motivated by seeing me win the competition, and hearing them say that, in turn, encourages me to do my job better.”

Chong echoed that sentiment when he said, “One of the effects of my participation in the show is that people now have high expectations for my designs, which also means that I’m not allowed to do a rough job anymore in the face of many people who say they look forward to seeing my collections in the near future.”

And what exactly did Lee do with the 50 million won in prize money?

“I saved it for my future plans, because I work for a company for the time being,” Lee said, adding that she thinks she is not ready yet to launch her own brand like Chong.

“I also plan to study a new field besides fashion design, which could be photography, installation art or something else,” said Lee. “It will be study not for a degree, but for my own sake, because I believe that designers should be creative in the first place, and for that purpose, I need to break my own the mold continuously by learning as many new things as I can.”

Chong joked, “They should have given me the prize money, because it was originally supposed to be used to launch the winner’s own brand!”

The designer added that the contestants in the show, many of whom, including Lee, have now become close friends, were another gift from Project Runway Korea.

“They are designers with diverse backgrounds, each of whom displays a unique outlook based on a strong personality. Just seeing them come out with all different designs for a given challenge during the show was an invaluable lesson to me,” Chong said. “I think it was one of the best things that Project Runway Korea has offered to me.

“You know they say it is not until you serve in the army that you grow up to be a man,” he continued. “I think the show can be compared to the army in the sense that we all had to live together in the same camp to undergo training, and the experience has taken me one step closer to becoming a good designer.”