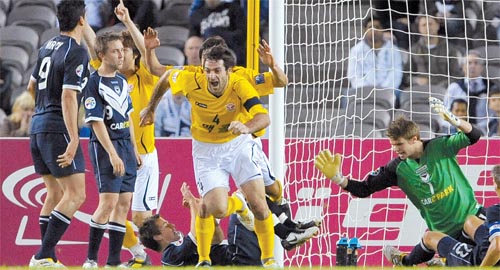 Sasa Ognenovski, center, of the Seongnam Ilwha celebrates scoring against the Melbourne Victory in their AFC Champions League football match in Melbourne on March 9. [AFP/YONHAP]

J-League champions Kashima came from behind to beat their K-League counterparts, with Koji Nakata and Yasushi Endo doing the damage. Jeonbuk, who won the AFC crown in 2006, opened the scoring four minutes before halftime with help from Brazilian star Eninho, who made the most of his chances after being put through by Lee Dong-gook. Nakata struck the equalizer in the 70th minute after latching on to a cross from Brazilian midfielder Fellype Gabriel. It looked destined for a draw before Endo prodded home a last-minute winner for Kashima.

In the other Group F game, Chang-chun Yatai, runners-up in last year’s Chinese Super League, crushed Indonesia’s Persipura with a lopsided 9-0. Costa Rican Johnny Woodly Lambert and Gao Jian both scored hat-tricks at the Jingkai Stadium, while Liu Weidong bagged a brace and Wang Bo added a late goal to inflict an embarrassing defeat on the hapless Indonesians.

It was an easy three points for Changchun as it bounced back emphatically from last week’s 1-0 loss to Kashima. Chinese teams enjoyed a good night, with Super League champions Beijing Guoan travelling to Japan and beating Kawasaki Frontale 3-1. Australian striker Joel Griffiths opened the scoring for Beijing eight minutes before the break, only to see Kosuke Kikuchi level the match three minutes later. But two second-half goals from Wang Changqing put the game beyond doubt to leave Kawasaki struggling with no points from their opening two games.

Melbourne-born Ognenovski haunted his hometown club when he scored five minutes before halftime, rifling home from inside the six-yard box after a goal-mouth scramble. Yun ensured Seongnam’s breakthrough victory with a bullet header past goalkeeper Mitchell Langerak off a Mauricio Molina corner five minutes from time.

Elsewhere, Uzbek giants Bunyodkor continued their perfect record in Group B, with Brazilian striker Denilson grabbing two to propel Luis Felipe Scolari’s side to a 2-1 victory over Al Wahda of the U.A.E. In Tehran, reigning champions Esteghlal played out a goaless draw with Al Jazira of the U.A.E. In Group A’s other game, Qatar’s Al Gharafa left it late to overcome Saudi team Al Ahli 3-2 in Doha thanks to goals from Sadd Al Shammari and Brazilian striker Araujo in the last 10 minutes.