Winter’s last gasp, but spring is near

Winter’s last gasp, but spring is near 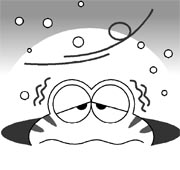 Just as the flowers started to appear, Jack Frost has returned for one last assault on Korea. The temperatures hovered near freezing this morning and the streets are covered in snow.

This past Saturday was Gyeongchip, the first day of a new season under the lunar calendar. The day marks when frogs that were hibernating for the winter come out of their holes and Japanese apricot blossoms appear. Yet, amid these signs of spring, we suddenly heard a warning for heavy snowfall.

The last cold snap, or kkotsaemchuwi in Korean, which comes without fail in the blooming season, is a biting chill. Although it is springtime, it hardly feels like it. No one enjoys this final cold front, but the warm weather won’t come until winter has its last say.

Meteorologically, the last cold temperatures here are due to cold continental high pressure, which withdrew from the Korean Peninsula after ravaging us all winter, coming down from the north temporarily.

There are similar phrases for the last cold snap in Chinese and Japanese. In China, it’s called “spring cold” and in Japan it’s “flower cold.” I prefer the Korean terminology though, because of its refined tone and beautiful imagery.

In Korean, people often use kkotsaemchuwi to describe a struggle to overcome something difficult. They compare the cold’s jealousy of the flower to obstacles in their paths, but take heart in the fact that winter will soon end and their troubles will be gone.

For we all know, no matter how hard the winter might try to postpone it, spring will always come.

Lee Jong-ok’s poem titled “Kkotsaemchuwi,” sings about hope, not pessimism, despite the difficult life he led during the gloomy 1970s.

“ .?.?. The stronger the wind gets, the straighter the waist gets/ the root grows without notice in the frozen earth/ the heavens give us shadow together with light/ and spring together with winter.”

The weatherman says there will be another cold snap next week. But it cannot stop the vigor of spring. It is nothing but a rite of passage that renews our love of spring.

Because they overcome such cold weather, the flowers that bloom in the early spring look more beautiful. I think the same applies to people’s lives. When difficult times end, spring comes. Now, let’s stand up together and welcome spring.