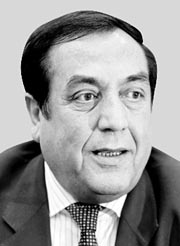 As Korean soldiers and civilian reconstruction workers prepare to deploy as part of a provincial reconstruction team to Afghanistan this summer, a senior Afghan official said Tuesday that they will be welcomed, and will be based in one of the safest regions of the war-torn country.

In an interview with the JoongAng Ilbo, Mohammad Kabir Farahi, Afghanistan’s deputy foreign minister, said his country is looking forward to the Korean deployment.

“The decision taken by the Republic of Korea is something the Afghan government has desired for a long time,” Farahi said through an interpreter. “The deployment of the PRT will mark an important step consolidating the bilateral ties between Afghanistan and the ROK.”

Farahi arrived in Seoul for a four-day visit and has met with Foreign Minister Yu Myung-hwan and Deputy Foreign Minister Lee Yong-joon. He expressed his gratitude for Korea’s decision to send about 100 civilians plus around 320 troops and 40 police officers to protect them.

“The warm reception by the Afghan people regarding the PRT includes all the personnel who are coming, including engineers and security personnel,” Farahi said. “The ROK, as the fourth largest economy in all of Asia, possesses a strong human capacity and people with great expertise in energy, agriculture, irrigation, mining and transportation, and such expertise can be valuable to Afghanistan.”

The Koreans’ base camp will be set up in the Charikar District in Parwan Province, spread over 430,000 square meters (106 acres) of state land.

Construction of the base is scheduled to start this month and the government hopes the PRT can begin its mission in July. The government has earlier said the troops will be stationed from July 2010 to December 2012.

Since the plan was finalized last fall, political opponents have squabbled over safety concerns. In 2007, the Taliban kidnapped 23 Korean missionaries in Afghanistan and killed two. Korea later pulled out medics and engineers from the country. Last December, the Taliban threatened “bad consequences” if Korea went ahead with the deployment. The Taliban accused Korea of reneging on a promise that it would never again send forces and said it “will never resort to a soft approach anymore.”

The Korean government has said it would not be deterred by the Taliban threats. And Farahi stressed that Parwan province is one of the safer areas of the country and that the Afghan government will do its best to guarantee the Koreans’ safety.

“Despite the fact that terrorism has been a threat against the people of Afghanistan over the past eight-and-a-half years, important progress has taken place.”